You’re playing solo queue in an uncoordinated setting and want to give your team the best shot of winning the game. Which hero do you pick, and on what map?

Here you’ll find five suggestions of the best heroes for each HoTS map. Let’s get into it. 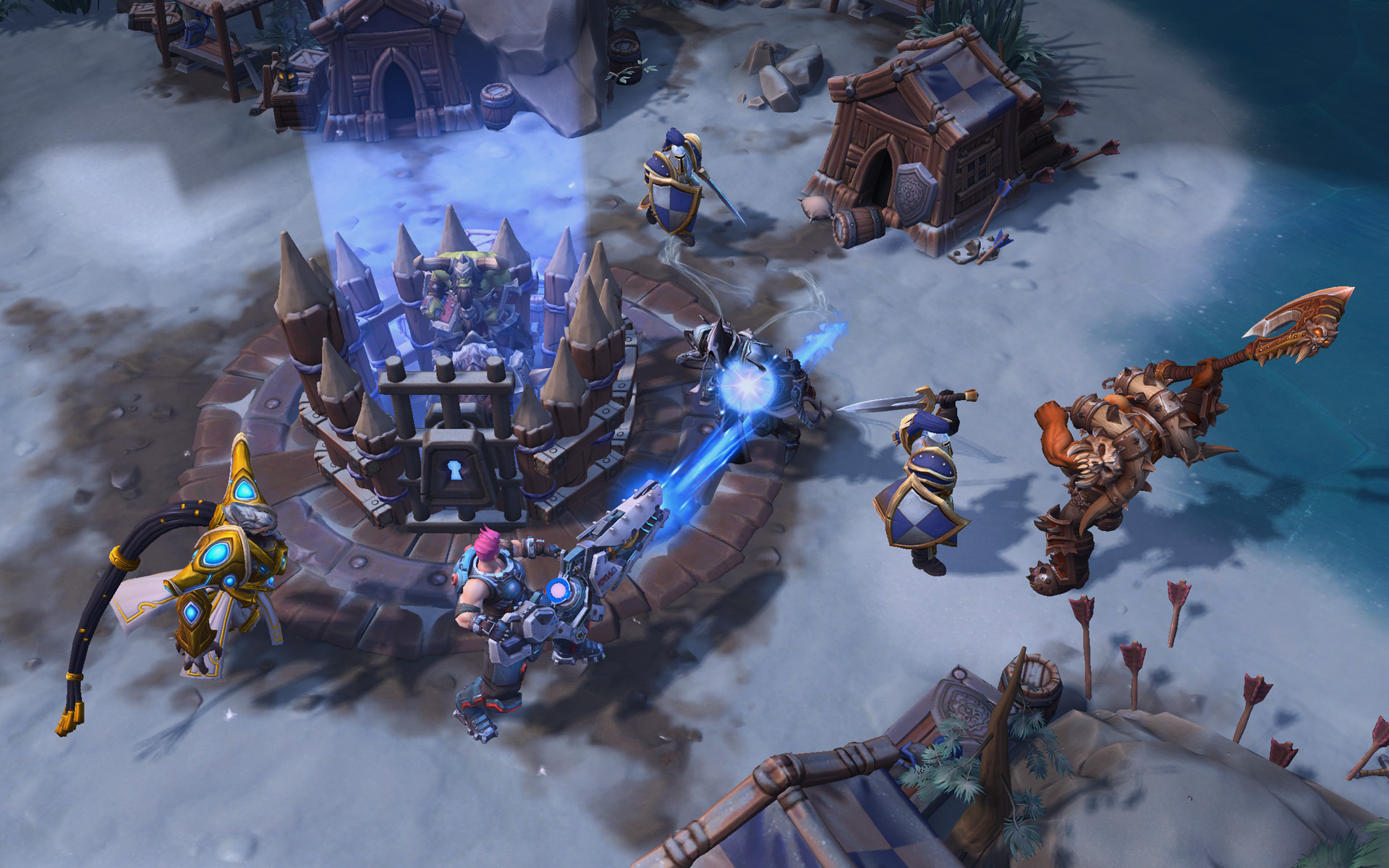 Alterac Pass is a bit snowbally. You want to prioritize objectives while keeping up macro pressure.

Maiev – Great wave clear, can solo mercs early on, and has great brawling presence during objectives. Since enemies tend to clump up, you can easily chain multiple people with Umbral Bind and get multiple resets with Fan of Knives.

Nazeebo – Nazeebo is great because of how much damage over time he spreads during the prolonged brawls over the objectives. His toads and spiders can also be a great zoning tool.

Samuro – Samuro wreaks havoc on uncoordinated teams on Alterac Pass. He can exert macro pressure if left alone, take mercs, and be a nuisance during the objective by stalling it indefinitely.

Alexstrasza – Alex’s Dragonqueen ability all but guarantees the objective for a good 15 seconds while it’s up. If the opponent wants to fight into it, they’re at a massive disadvantage and should result in kills for your team. 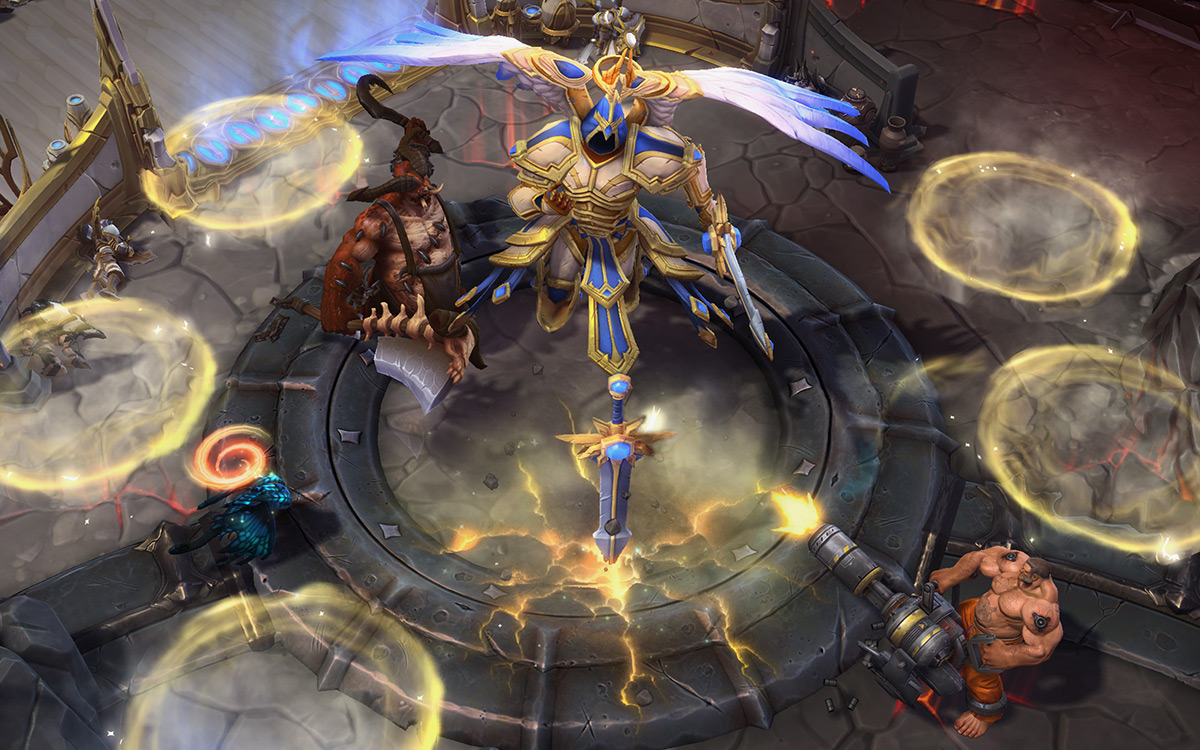 Given Battlefield of Eternity is just a small two lane map, the most important thing when selecting heroes is their race potential during the immortal phase. You also want to prioritize heroes that are good at team fighting.

Raynor – Shreds through the Immortal, especially if you pick the Exterminator talent at level 1. Both ultimates are great choices – Raynor’s Raider for securing the objective even faster, or Hyperion for zoning and siege damage as you push with the Immortal.

Valla – Valla’s Q build with Monster Hunter talent is the highest DPS on Immortals in the game.

Hanzo – Scatter Arrows rip through the Immortal with the talents Simple Geometry, Serrated Arrows, and Never Outmatched. Given the long range of Scatter Arrows, he can poke it down without putting himself at risk.

Sgt. Hammer – There are a lot of safe spots for Sgt. Hammer to sit and fire at the Immortal with basically no threat. Unless the enemy team drafts properly or is extremely coordinated, they won’t even be able to get in range without you and your team destroying them.

Li-Ming – Can safely poke the immortal indefinitely with her missiles and orbs. Fits into a “stall comp” like Hanzo. 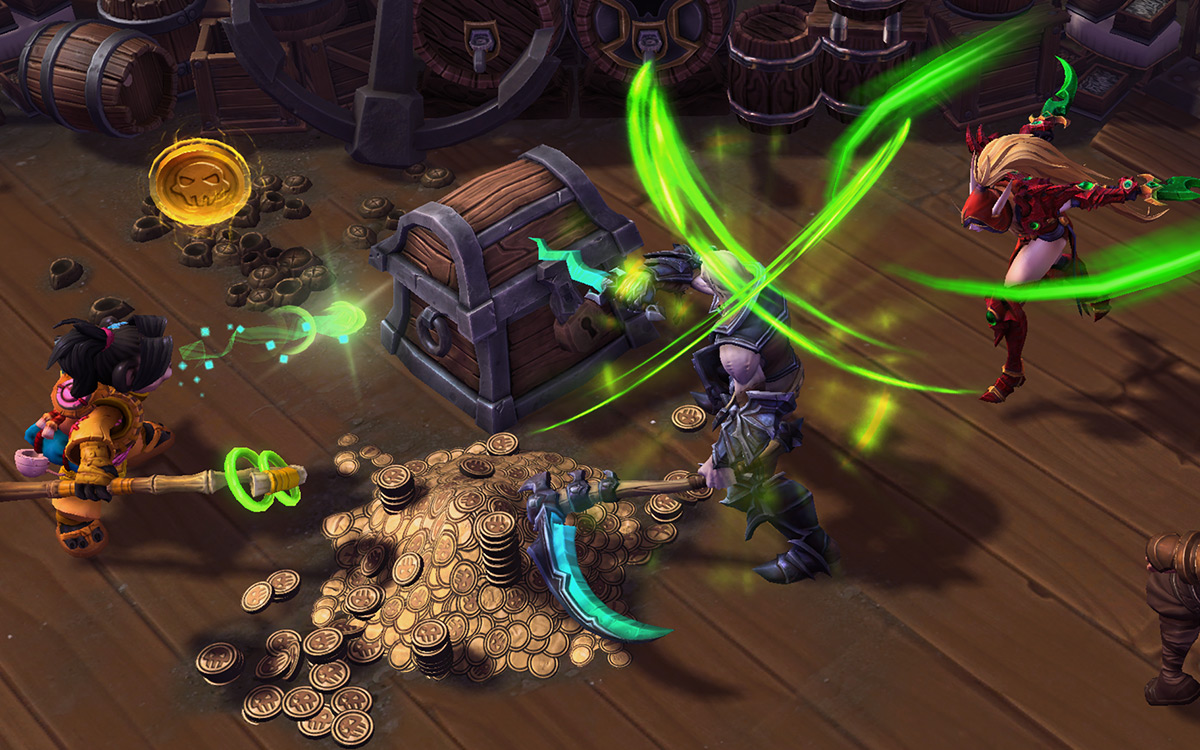 Blackheart’s Bay is all about the macro and PvE. Played properly, the winning team essentially just has to go around the map killing mobs and mercs, not taking unnecessary fights, and depositing only when they have an advantage.

Xul – Xul can either go bot or doublesoak top and mid lane while the rest of the team pushes bot in a 4-1 rotation. He can also solo mercs and has a decent escape if ganked with Bone Prison.

Zagara – Like Xul, Zagara can doublesoak and push hard. Her creeps allow you to keep sight of the opponent turning in at all times.

Illidan – Illidan isn’t in a great spot in the meta, but it doesn’t matter on Blackheart’s Bay. Illidan can solo the bruiser camp very early to push top and give your team an advantage. He can also sneak the boss with just one or two other teammates helping.

Falstad – Great macro presence and can solo mercs with the Bribe talent. 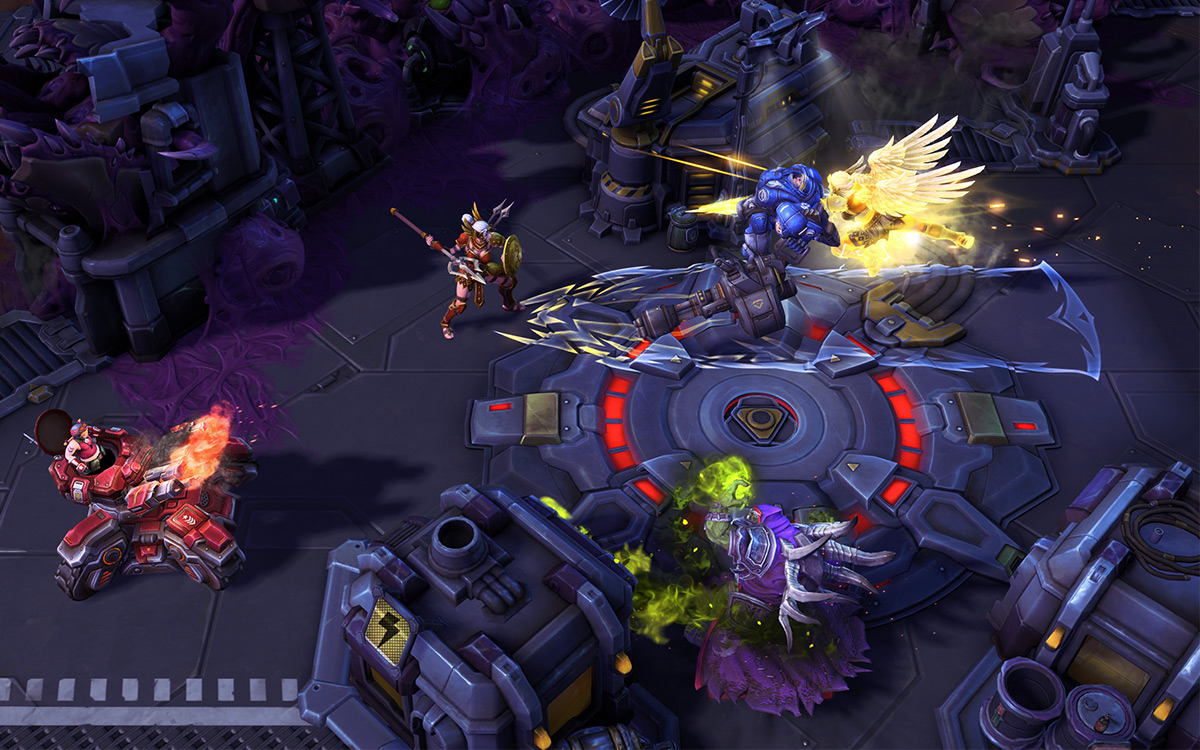 Blaze – One of the best solo laners. Great sustain and can bully almost anyone out of lane.

Yrel – Another great solo laner that can control the point well with her hammer.

Dehaka – Good sustain and waveclear for the solo lane, and can instantly burrow to help the team out during fights.

Guldan – Excellent wave clear for pushing with or clearing the Zergs. Rain of Destruction is sometimes viable.

Kael’thas – Strong point control given how clumped up people are. KT can also clear the Zergs well with Flamestrike + Phoenix. 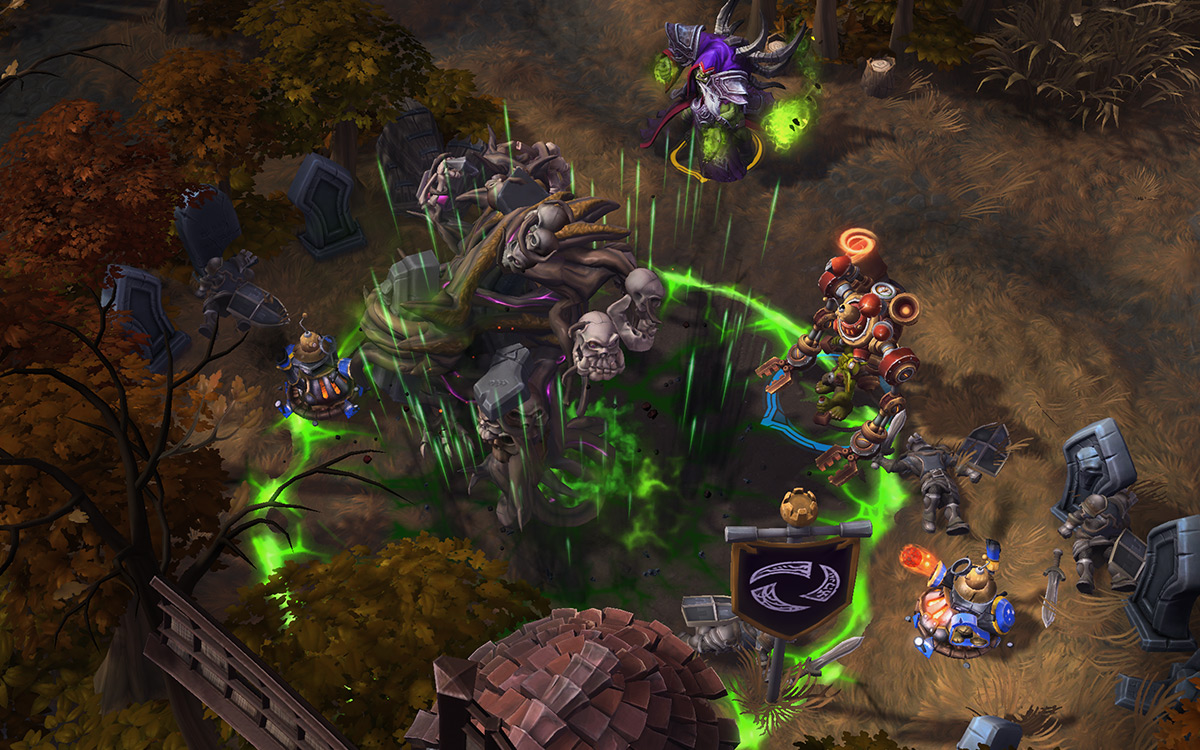 Zeratul – Zeratul shines on Cursed Hollow because of how much room he has to maneuver. Enemy heroes also tend to be isolated a lot which gives him the opportunity to pick them off.

Dehaka – Dehaka can spend extra time soaking while your team stalls the objective and pop in at any time to help turn a team fight around.

Brightwing – Similar to Dehaka, her global presence allows her to soak and help the team on a dime. Bribe also works well, especially if you can sneak the enemy’s siege giants.

Abathur – Abathur’s best map, given how large it is. Teams that understand how to play around him, stalling the objectives as long as possible to let Abathur get them a level advantage, will find great success.

Falstad – Another global hero that provides good utility during team fights. Gust can be really useful for securing and stealing bosses as well. 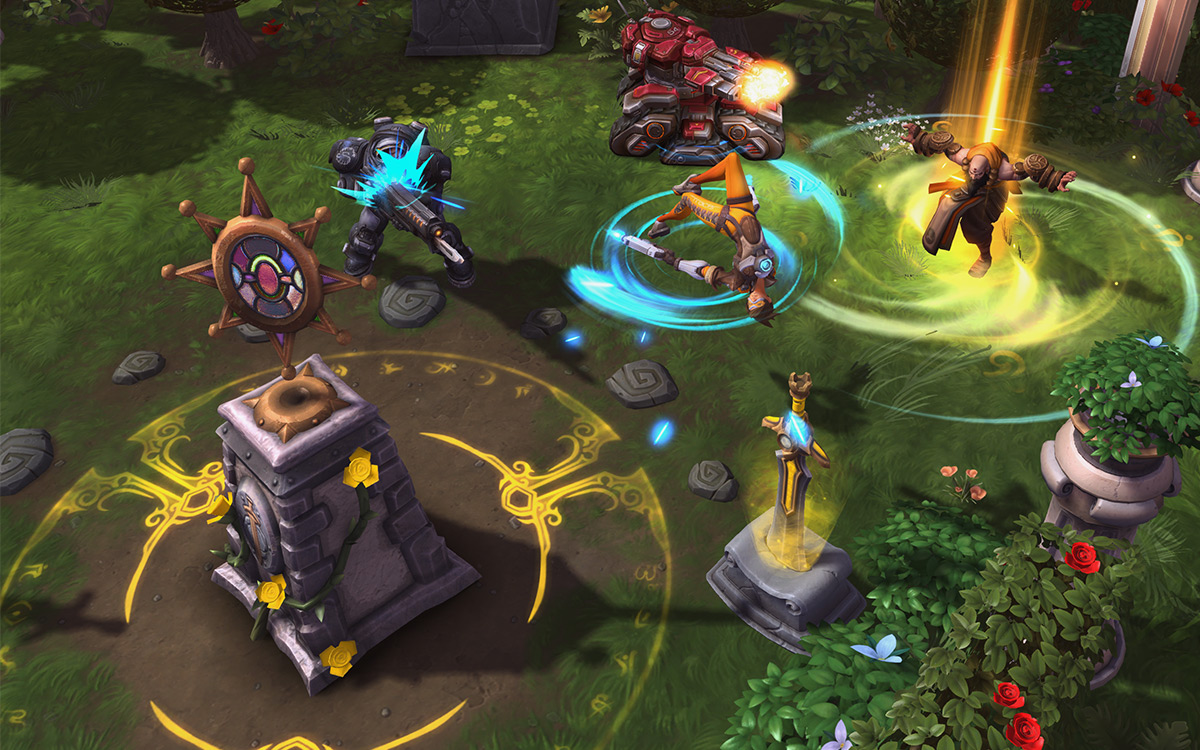 Thrall – Works in either the solo lane or 4-man. Can also take mercs easily and brings good team fight presence with both ults.

Garrosh – Garrosh is downright scary in the 4-man rotation mid/bot lane and should lead to many kills, especially if paired with someone like Jaina or Maiev.

Jaina – Excellent addition to the 4-man gank squad by providing a ton of burst damage. 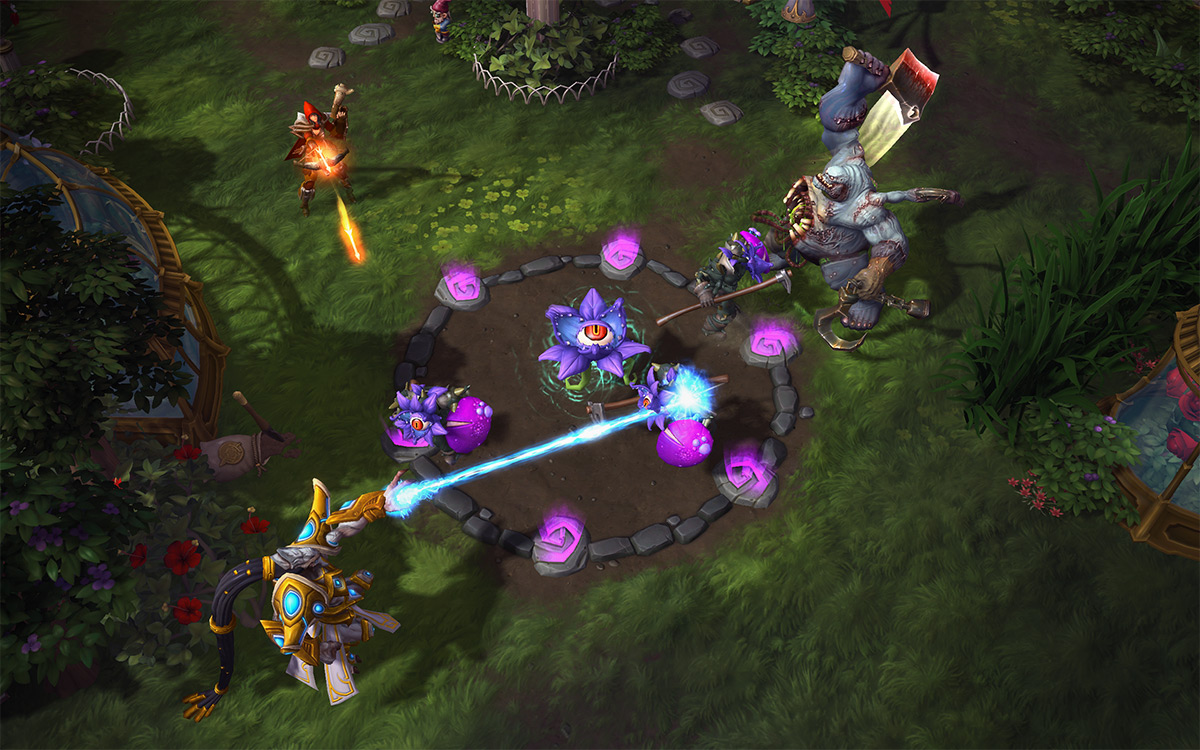 Probius – Probius is surprisingly strong on Garden of Terror. As of this writing, he boasts a 67% winrate across 39 games on hotslogs in the past month. He has great zoning and objective control with his pylons and cannons.

Johanna – Johanna can kill and distract the Shambler Defenders easily while someone else channels. She has a lot of sustain which is helpful for the long teamfights around objectives.

Rexxar – Rexxar can take mercs just before objectives spawn, which can push a ton if left alone. Misha is also a huge nuisance to opponents trying to cap the objective.

Gazlowe – Similar to Probius, Gazlowe provides very strong objective control. Graviton Bomb is also easy to land given how clumped up enemies are. 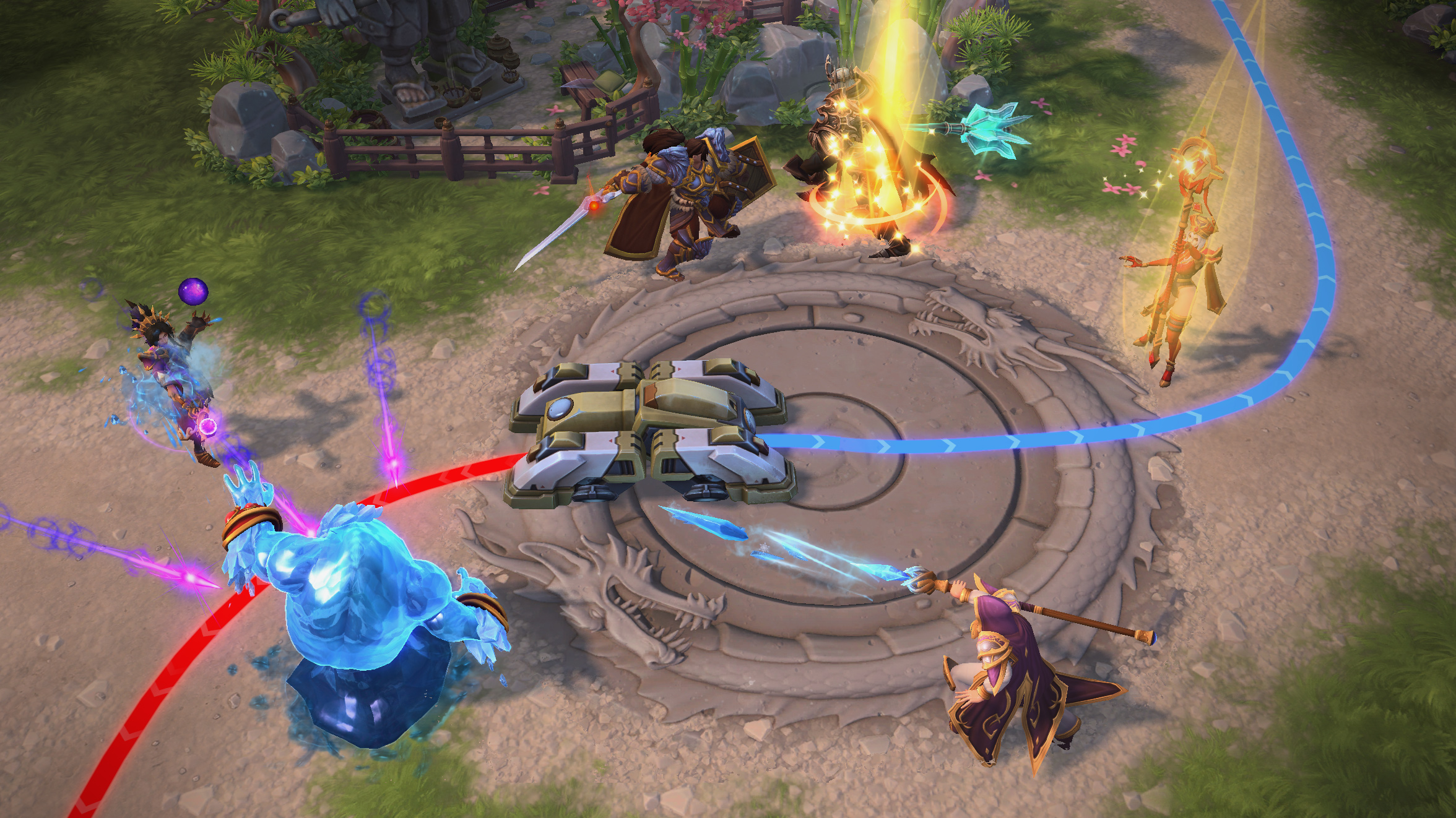 Lucio – Great for helping the team chase down kills and his heals sustain the team during long fights.

Artanis – Excellent at soloing mercs including the Samurai. Holds his own during long team fights.

Fenix – A great auto attacker with a reliable escape, useful given how big and open the map is.

D.Va – An all around nuisance to enemies. Good sustain for long fights and can use Self Destruct to force enemies to scatter.

Rexxar – Can solo merc camps including the Samurai early on. Misha holds the objective very well and is very difficult to push away. 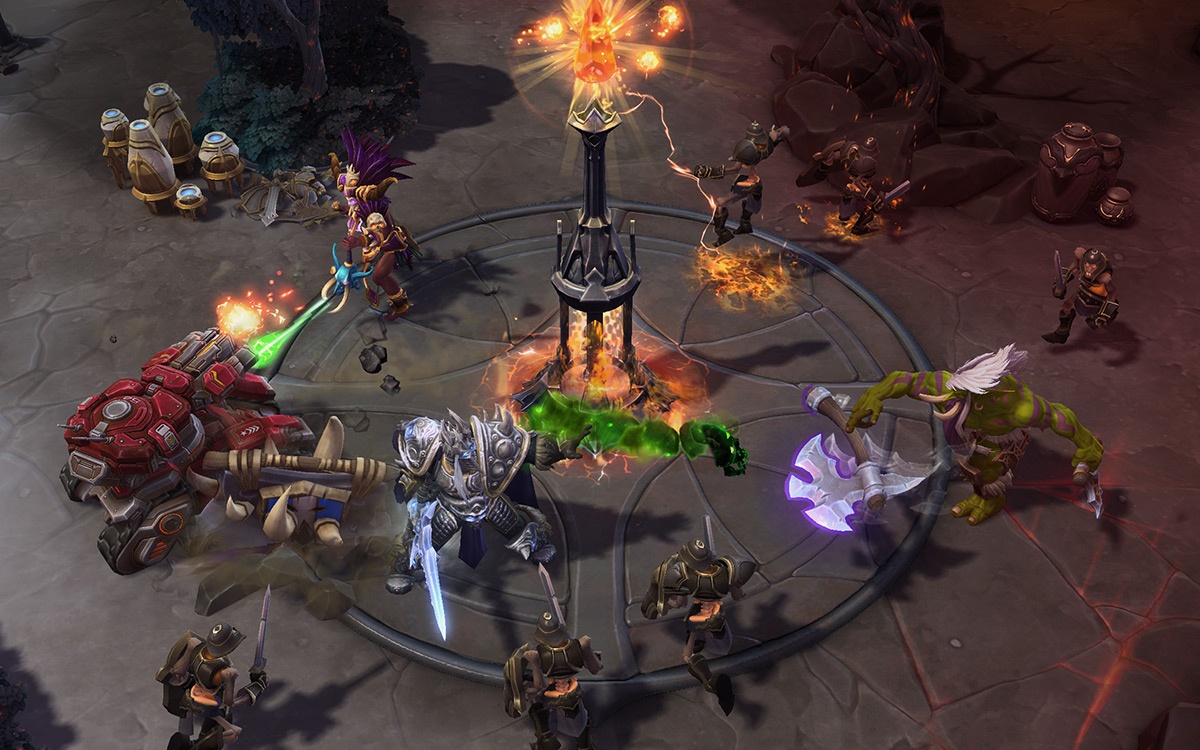 Maiev – Huge reset potential given how grouped up enemies can get. Clears waves and guardians quickly.

Sonya – Spin to win on the minions and enemies! Heals a ton off these Whirlwinds and can clear the shrine guardians quickly.

Blaze – Blaze makes it very difficult for enemies to get in proper position during the objective. He also clears them quickly and both ults are great for teamfights.

Kerrigan – Arguably the fastest guardian killer with her Ravage. She also makes a great part of a 4-man gank squad between mid and bot. 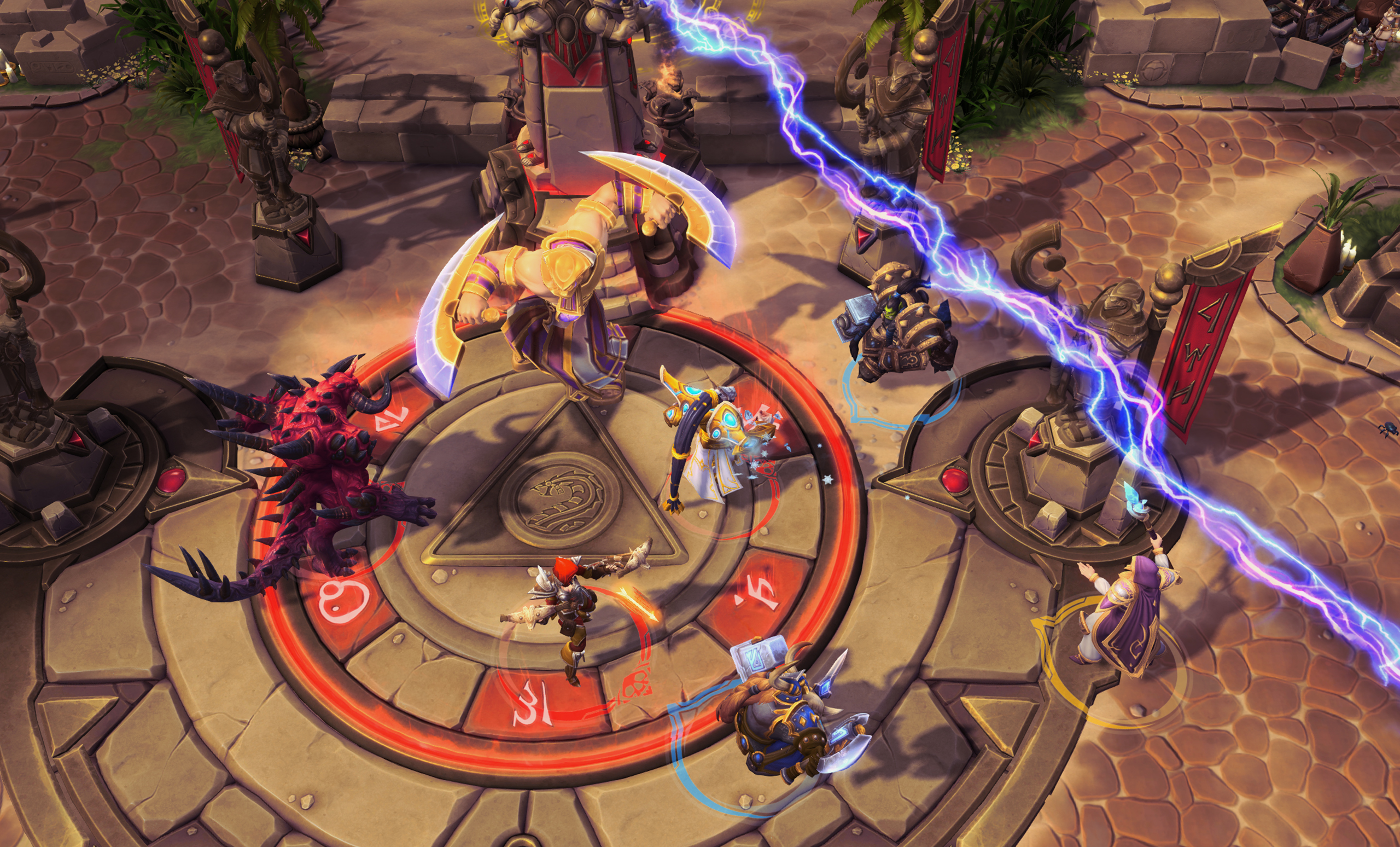 Sonya – Strong sustain for the temples, can do mercs, and solo top lane.

D.Va – Nearly impossible to get off the point if played properly.

Arthas – Offers great control over temples with his slow and tankiness, especially if the other team has a lot of melee heroes.

Dehaka – Dehaka can control a point and burrow in immediately to help the team win a fight over another one if necessary.

Illidan – Sky Temple is one of Illidan’s better maps. He can do mercs, solo temples, and Hunt in to secure kills for the team. He can also do the boss early on. 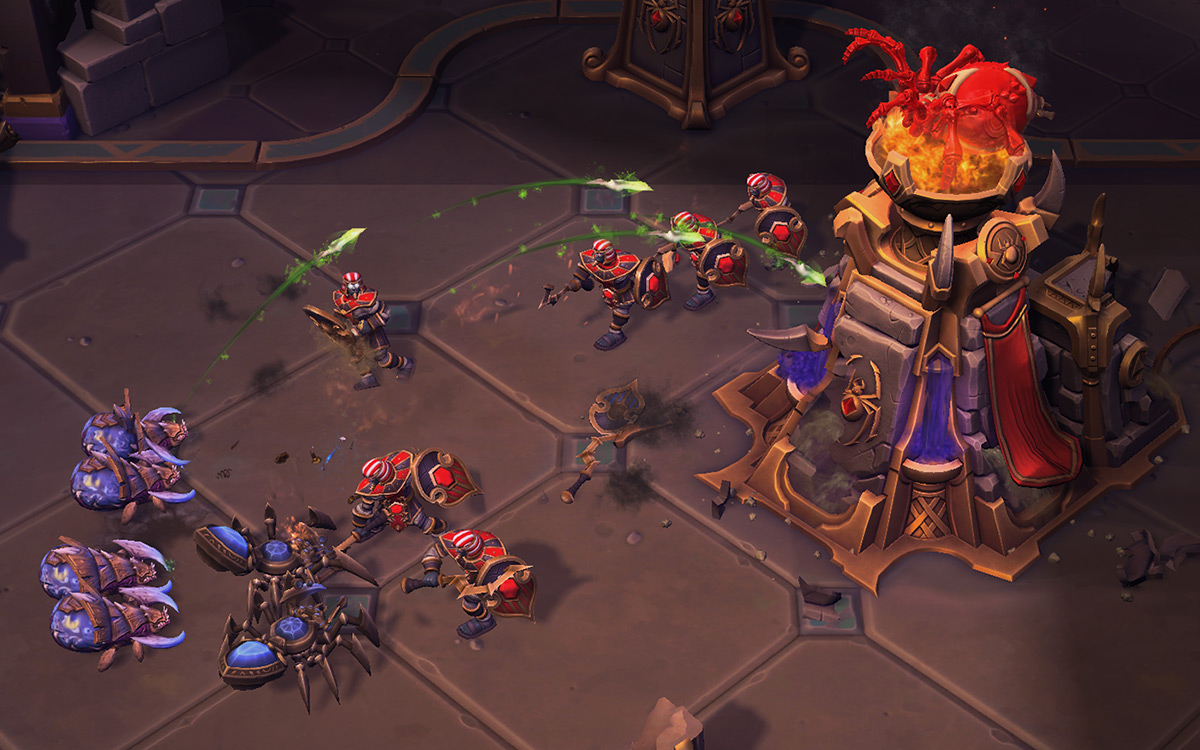 Kerrigan – Kerrigan is a beast on Tomb because of how small the map is. As part of a gank squad, with a reliable stunner, she all but controls the early game.

Garrosh – Equally as scary as Kerrigan is Garrosh for the early game ganks.

Jaina – Great wave clear and works well as part of a gank squad for the combo potential.

Maiev – Simlar to Jaina – excellent wave clear and can easily hit multiple people with her chains and knives.

Sylvanas – Makes the push even stronger and helps snowball a win that much harder. 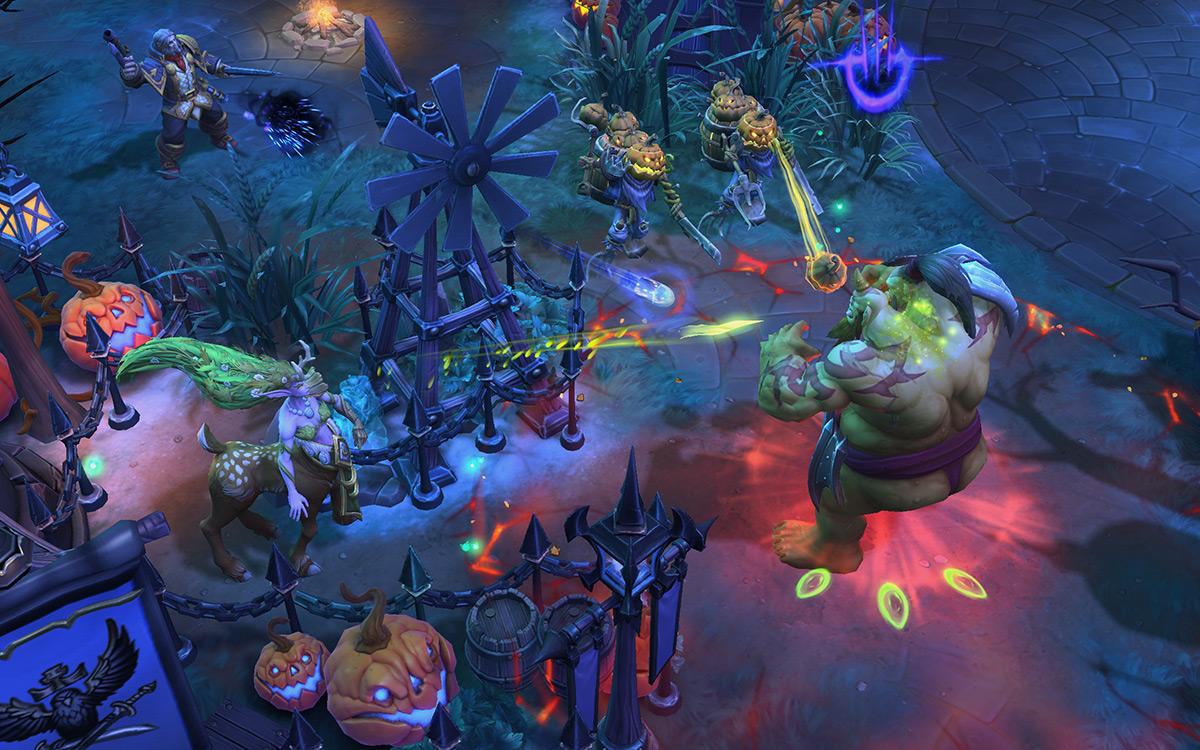 Orphea – Orphea basically is a better Chromie now that she got nerfed. She can stall objectives for a very long time and deal massive damage if enemies are clumped.

Mephisto – Can stall the objective for a long time from a safe distance. Good waveclear and teamfight potential.

Nazeebo – Does a lot of damage over time. Games on Towers of Doom tend to last longer, so Naz scales well with this.

Kel’Thuzad – Kel’Thuzad does well on ToD given how cramped the fighting spaces are. It’s easier to hit chains and he can also stall out the objectives quite long.

Malthael – Can double soak lanes and get quick rotations from Pale Horse. It’s easy to hit Death Shroud onto multiple enemies and both ults are great for fights. 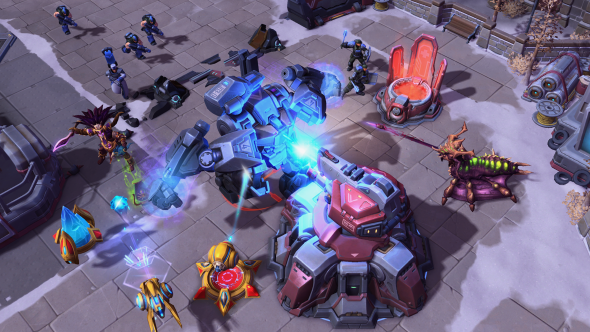 Ragnaros – A strong solo laner with good AoE spells during the objective. Molten Core also forces enemies to run off the point or fight at a huge disadvantage.

ETC – ETC has the potential to hit some 3+ man moshpits when everyone is on the point. His sustain isn’t the best but his slides usually result in a kill if followed up on here.

Raynor – Played right, Raynor should be dishing out tons of sustained damage when contesting the point.

Orphea – Orphea has an easy time hitting multiple opponents with all of her abilities, leading to some devastating combos.

Alexstrasza – Very strong healing plus Dragonqueen, what more can you ask for from a healer? Samuro – Split push is very strong on Warhead Junction given how large the map is. Most teams won’t rotate fast enough to deal with it.

Illidan – Can solo mercs and bosses, and Hunt ensures the enemy is never safe when traveling alone.

Brightwing – Bribe mercs and help your team during team fights by teleporting in.

Zagara – Applies a lot of merc pressure and can be everywhere at once with Nydus Network.

Dehaka – Global heroes are great on big maps as you’ve surely seen by now. Dehaka can cap a nuke by himself then immediately join the team to contest another one.

Hopefully this article helps when deciding what heroes to pick on which map. For the best heroes in general to carry with in HoTS, be sure to check out our other article: The 10 Best Heroes to Carry With in Heroes of the Storm.