We all have our favorite ships for our own reasons and priorities, be it the universally popular Carrack or Cutlass, the reliable workhorse of every fleet. Here is my top ten list, backed with whys and hows, tons of in-game experience of the ships, and my interpretation of the info out there. 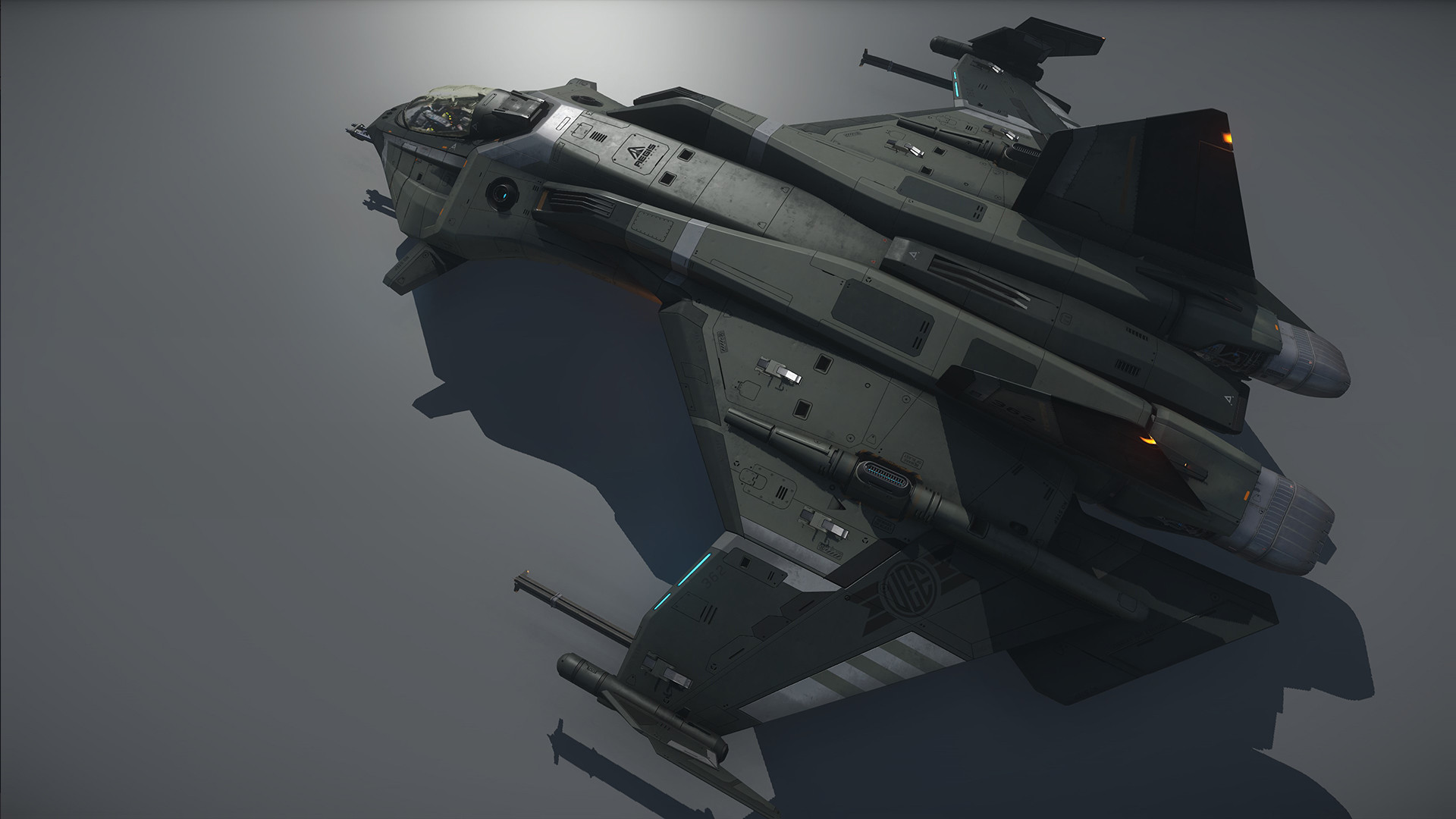 Once upon a time merely a hangar queen, later a very competitive fighter in an arena dominated by Sabres and Super Hornets, right now takes a little bit of backseat due to Buccaneer’s and Arrow’s appearance. While still a competitive fighter even if not compared to her 3.0 days, the size, maneuvrability, default loadout it comes with all makes this old girl struggle against newer additions. However, all is not lost about this agilei aerodynamic light fighter! This twin engined, mean-looking craft can still pack a punch with 3x Size 3 weapon mounts, a good amount of missiles and decent acceleration to boot. Making Gladius still a formidable fighter if one does not like the look of Arrow or can not stand Drake ships, or just likes the unique HUD this ship has, not to mention superior atmospheric flight.

This ship can only be described as a twin rocket strapped into a cockpit and given a hefty medium fighter firepower. The Drake Buccaneer features twin really large engines, incredible amounts of acceleration, a real flexible loadout thanks to being able to mount 1x Size 4, 2x Size 3 and 2x Size 1 weapons and mobility slightly better than Gladius, while being slightly shorter, thinner but taller. Wide cockpit area, no ejection seat and the inability to go fully gimbaled prevents this ship from being a go-to light fighter in the game. Not to mention you are going to be disabled rather easily in a fight if you are not careful. 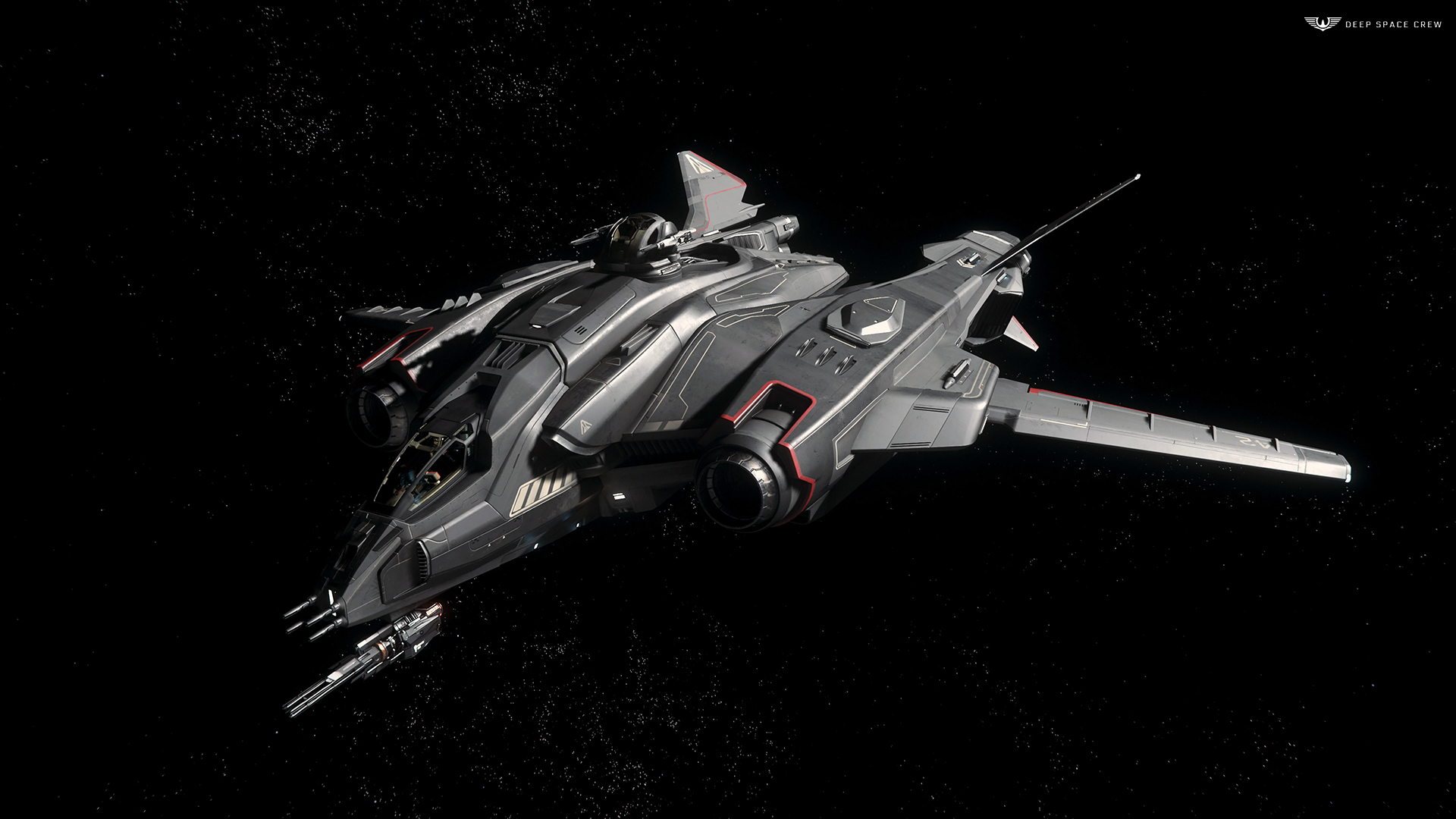 The Heavy Fighter. If you wanted a fighter that could charge into the fray, looked great while doing it and had a bed, this would be your choice. While not a flexible one due to fixed Vangyard Specialty Weapon Mounts (Size 2) of it and a Size 5 weapon mount, this vessel forces you to go full fixed and full energy weapons at the moment. Offering a bed that doubles as an escape pod, rifle rack, storage, shower and toilet, this durable warbird tries to make up what it loses in combat flexibility with indirect utilities and long-range capabilities. Equipped with medium components just like the Constellation series and Freelancers, this fighter can take a great amounts of beating, which makes it a reliable bomber hunter and convoy escort.

Recently it received a complete interior and exterior rework that brought it more in-line with concept art, although the weapons did not change, looks more streamlined than before and even more aggressive. 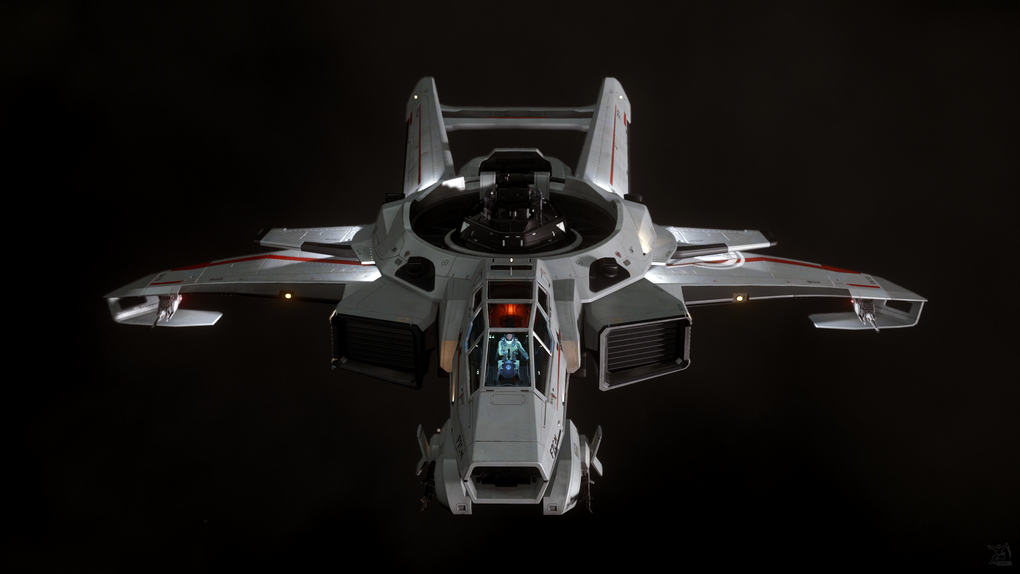 Ah yes. The Super Hornet. Once upon a time king of the fighters, with incredible amounts of weaponry, be it fixed or gimbaled, missiles, huge amounts of durability, combined with 2nd seat that isn’t found in fighters usually. While lost it’s king of the fighter status to first Sabre and later the Arrow and started to dust after getting plagued with infamous power inefficiencies and overheating since 3.2, with new flight model, heat 2.0 and power plant adjustments and most importantly equipment persistence of 3.5.1, the Super Hornet has been essentially reborn and returned into competitive field once again. Potentially having highest damage per second with full gimbaled weaponry thanks to Nose Turret and the signature Ball Turret at the top, Super Hornet shines as a durable fighter with ease of use, thanks to introduction of Gimbal Assist system. 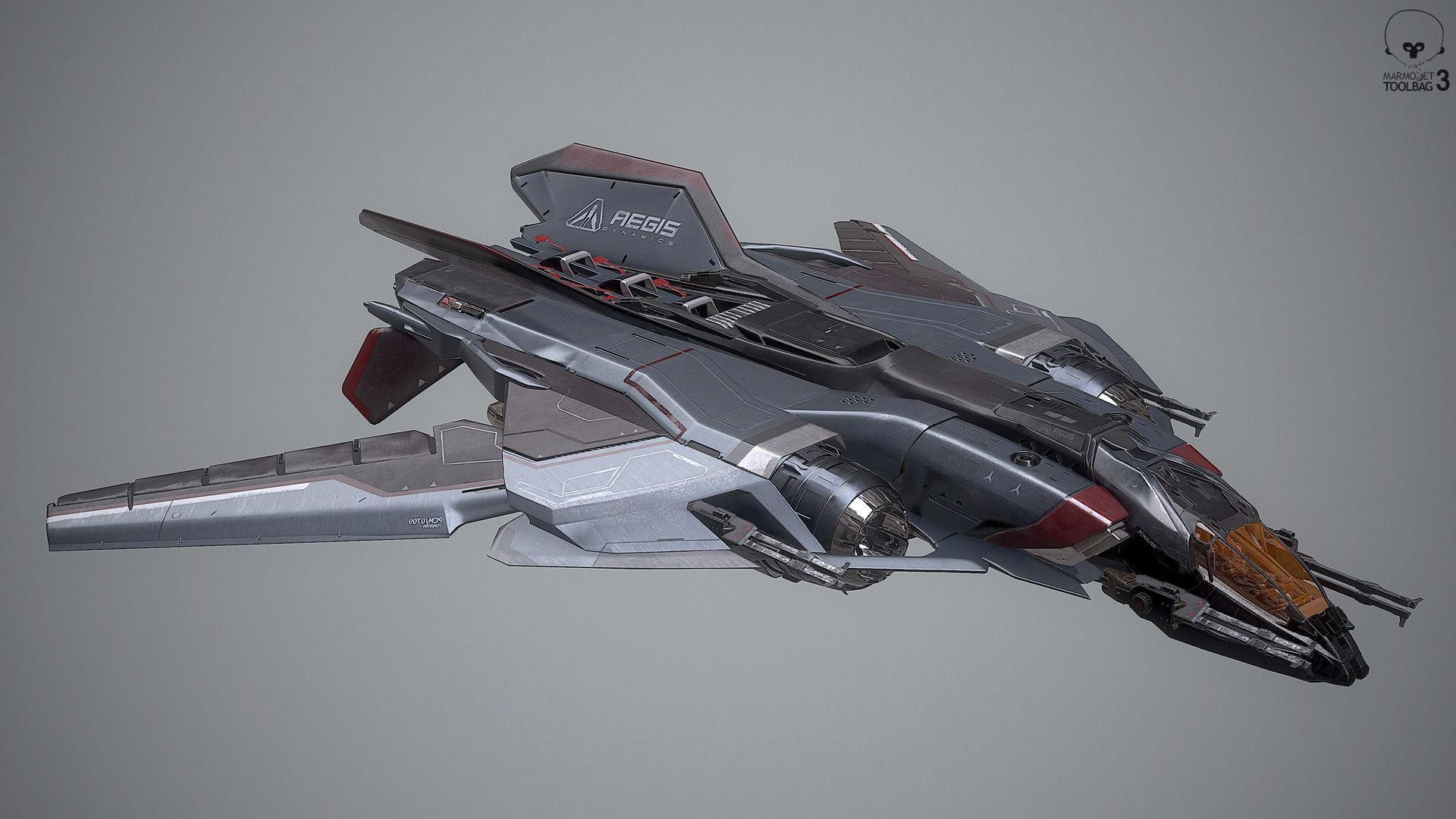 The Stealth “Medium” Fighter with extreme redundance and abundance. Featuring 2 Small Powerplants, 3 Small Shields and 4x Size 3 weapon mounts, combined with great amount of speed and acceleration, the Sabre has been the absolute best fighter for very long amounts of time. Until 3.3, the Sabre was able to go into any dogfight and come out on top, not only limited to that, but actually it was the go-to Medium/Large ship hunter as well, because shields were not really balanced and weapon damage was through the roof, a lone Sabre could decimate any ship in less than 30 seconds.

In fact, even when 3.3 patch came, cannons became one-shot-kill monstrosities and suddenly Esperia Glaives were terrorizing known space left and right with dual Size 5 weapons, Sabre was still neck-on-neck with Glaive, even after the Vanduul replica’s newfound, although short-lived power.=

However, Arrow’s introduction to the game and later 3.5 Flight Model overhaul changed the tables heavily and the change was noticeable for Sabre, if not devastating to some owners of it. As speeds, accelerations and turn rates all dialed back with 3.5, the sabre lost it’s immense amounts of mobility, 4th Shield Generator it had and with that, practically immortal status. It became a heavier Gladius essentially. While still competitive, a Sabre pilot can not afford to be as reckless as before anymore. While 3.6 shield changes may make it a “shield tank” and allow the ship to shrug off a good amounts of hits, bring a semblance of “glory days”, there are better ships if one desires to reach absolute maximum performance now. 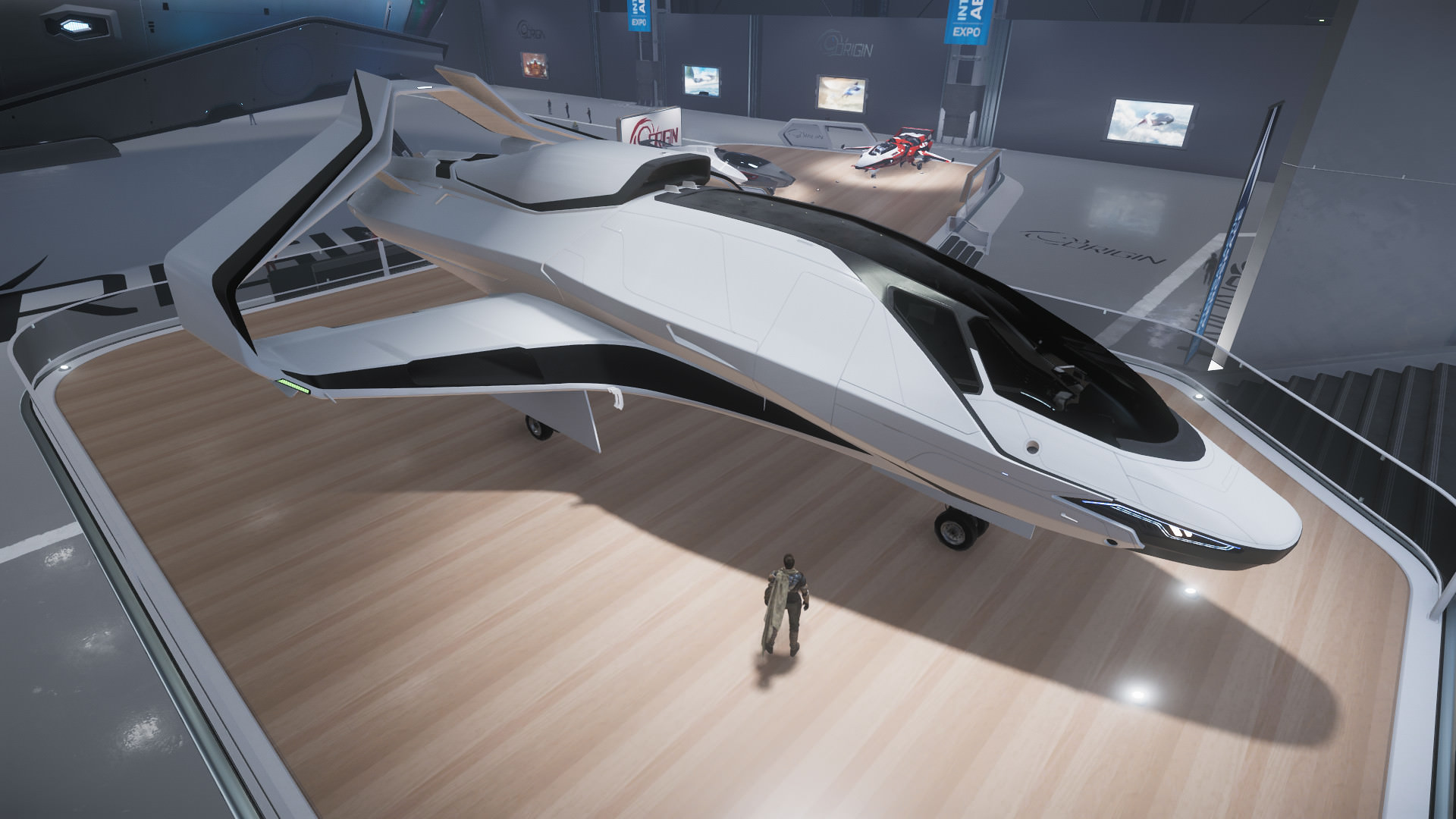 The latecomer shiny space BMWs. The 300 series has been in an interesting spot and gained features, buffs and later a complete customization feature, alongside a complete rework, while keeping the affordable price they have.

Somewhere in 3.2 (or was it 3.3?) All 300 series ships got a weapon size buff, which put them into lower-tier but reliable fighters rather than good looking peashooters. Especially the 325a came into a very good shape, to the point I could go toe to toe with most, if not all Sabres, when dogfights were dominated by Sabres and Glaives. In 3.5.1 however, the real deal got delivered. The rework, and the customization system. Rework brought cargo space of varying sizes to all 4 variants. Yes, the racer you got? It can carry some cargo now, alongside being one of the fastest ships in straight line and having a bed!

This alongside the customization system skyrocketed the popularity of Origin 300 series, especially the 325a and 300i. The latter can carry same amount of cargo as an Avenger Titan now and they are almost the same price, with an added bonus that you can change both exterior and interior to your liking.

That one ship that can do almost anything. Cutlass is regarded as the workhorse of any fleet, partly due to it’s price point and partly due to it’s immense amounts of versatility. It is a ship that can do smuggling one second and churn out a pair of Dragonflies and an armed to brim infantry squad the next second, while a few more firing at ground targets from it’s now-open side door the next second, All while requiring only you and a friend of yours to fully crew it, alongside who gonna ride the Dragonflies and the team you are going to insert of course. Practically the only thing this ship can not do is Mining in 3.6.

However, such versatility has to have a cost, and being a Drake ship does not help when it comes to disadvantages. First, it is almost Vanguard/Freelancer sized, while having only 1 Medium Shield/Cooler/Powerplant opposed to 2, which other ships of Medium size usually comes with. Not only that, but there is a bug (it has to be) that makes the ship only as strong as a light fighter once the shields are down. Actually an Aurora has more hitpoints than Cutlass if we do not count the shield. Not only that, but as with all Drake ship, this one also lacks Escape Pods, the thing makes this worse is actually, this ship doesnt have a toilet or shower at all. No, not even a cheap bucket at a corner of the ship. 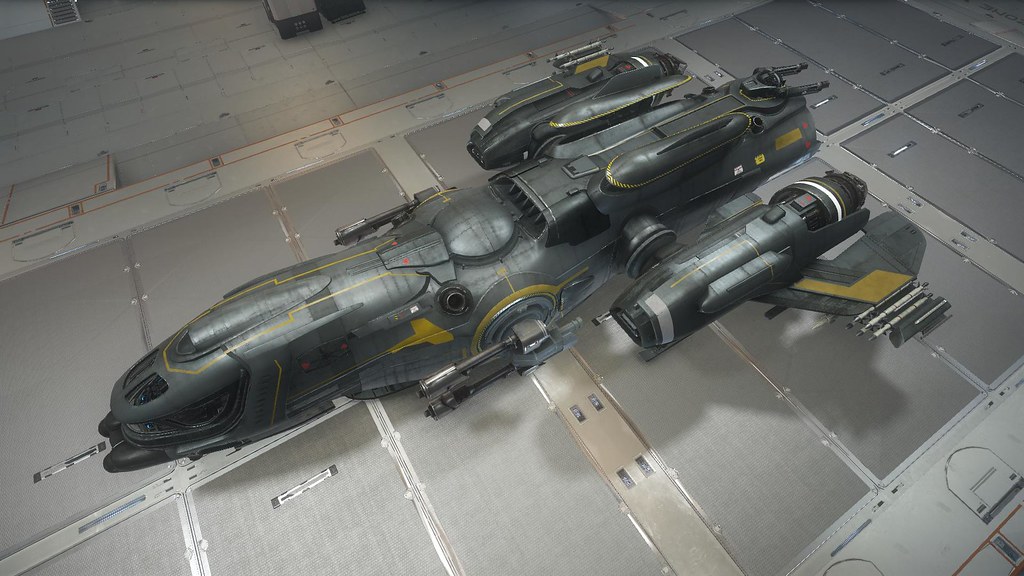 Freelancer MIS: As the Cutlass is plagued with bugs and the Freelancer series are in a better shape, being the most powerful variant, the MIS is a worthy one for third place. The amount of missiles you can bring on an enemy, combined with respectable utility and the good old twin Size 3 guns on turrets makes this vessel a nightmare of both fighters and Medium-sized ships while nearly having as much as cargo space as Cutlass. 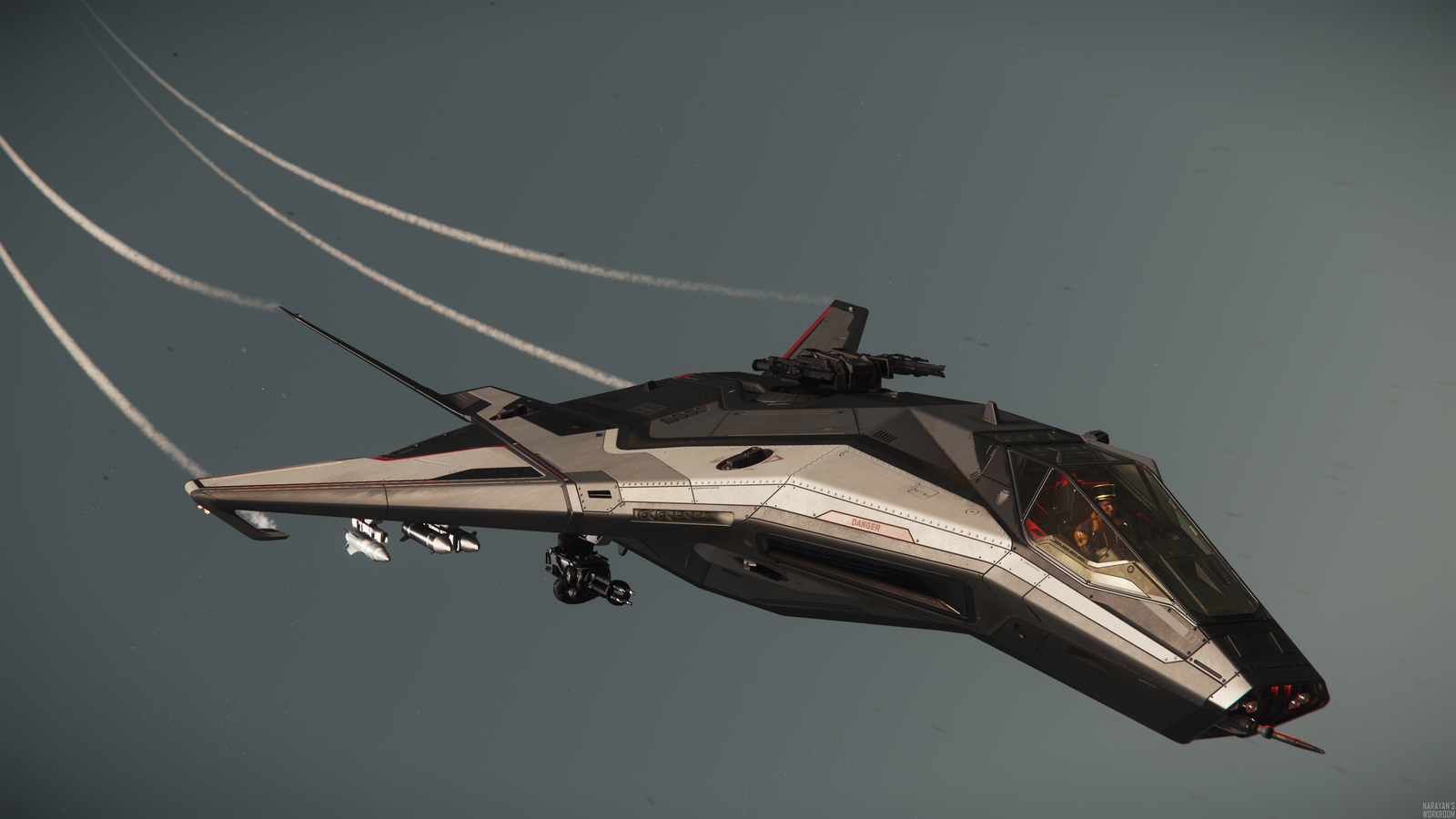 The most advanced light fighter, Anvil marketed this one as, they were right. This little tough and agile ship quickly shaken the fighter matches the moment it came. With the ability to mount 3x Size 3 weapons, or going gimbaled and keeping it’s top turret intact, this snub-sized monstrousity is capable of beating any and all fighter, alongside a few Mediums. While most of other ships gets crippled when their wings gets shot off, this one not only keeps weaponary intact, but also gets even harder to hit, as if it was not hard enough. While does not accelerate as fast as Gladius, it still has the same armament save for a few less missiles and turns faster. All while being cheaper than any of the competitive fighters, both in pledge store and ingame. While the new flight model and some nerfs afterwards made it from “tankier than Super Hornet while being faster than Sabre” to “Somewhat manageable” it is still the very best fighter you can get your hands on. Unless you manage to get a lucky shot with a Super Hornet or Vanguard full salvo, you are going to dominate the battlefield as long as you play to it’s strength and do not cripple it with going full energy repeaters. 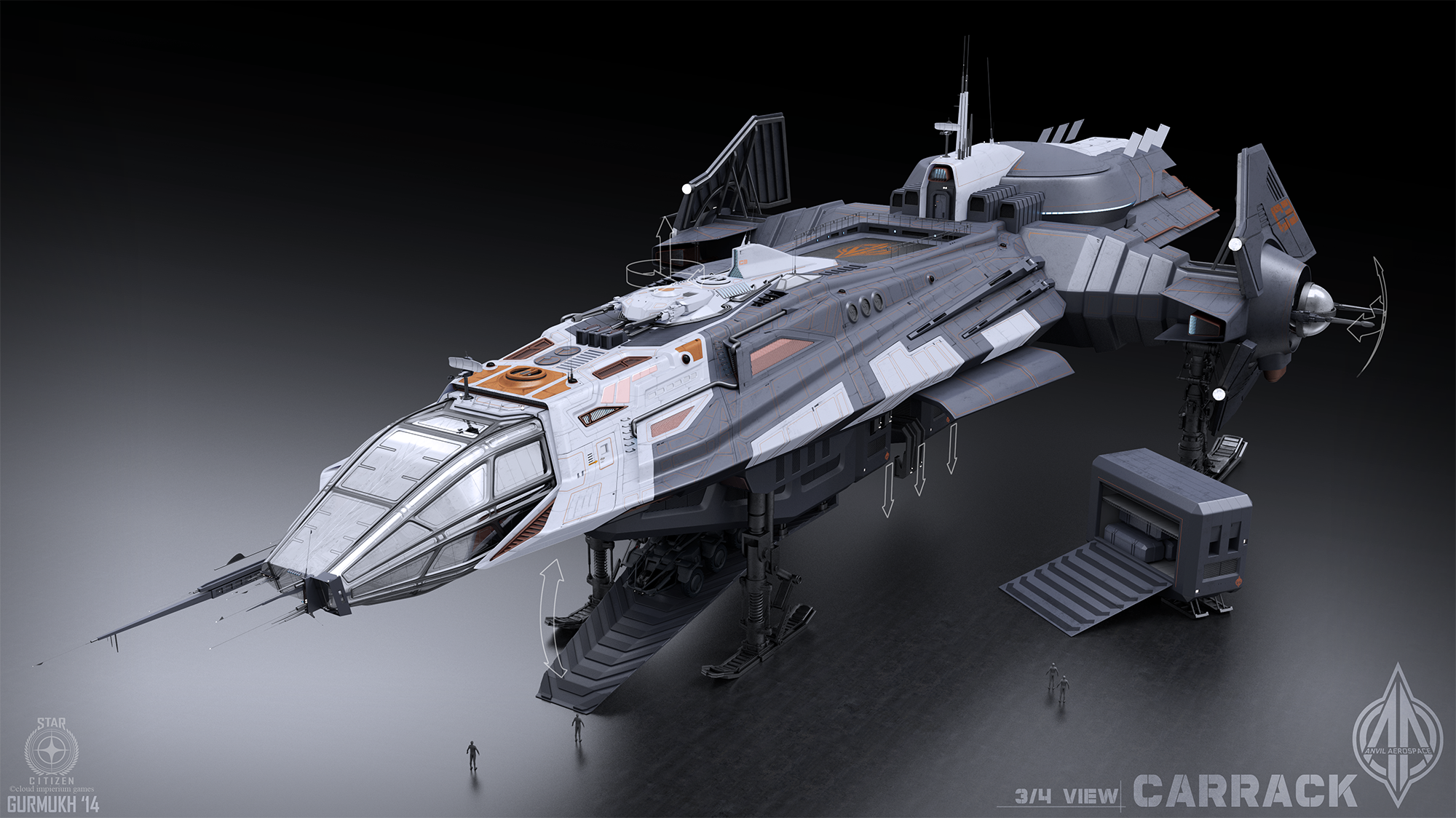 I can already hear the zealous fanbase of Carrack. While they are not as much as a cult like “THE CLAW”, they are actually louder than them, and they have not get their ship yet. The pinnacle of exploration ships, Carrack is still in concept after years passed. However it is planned to be added for 3.8 patch, which will come either with CitizenCon or a bit later, well, probably later.

What makes Carrack stand out from an already numerous lineup of exploration craft is, it is capable of “self sustained flight for extended amounts of time.” which the meday, repair bay, generous cargo space and vehicle garages confirm. During whitebox phase, the Carrack were to be increased in size however recently it got dialed back and actually got smaller than what concept intended to. For a short time, there was a furious storm about it’s landing gear, which got changed in later footage shown by CIG. Now, sitting at 123 meters comfortably, the Voyager of Star Citizen waits for her Captain Janeway’s, or the other way around…

There you have it, the top 10 best ships in Star Citizen.

Honorable mentions include the Mercury Starrunner and Valkyrie.

Mercury Starrunner: Seen rightfully as “Star Citizen’s Han Solo Ship” this one offers smuggling, data running and regular cargo running with a compact size and good enough speed, at least that is what we are told in the Concept Sale of this ship. If it stays true to the concept, this one can be the “Super Cutlass”.

Valkyrie: Star Citizen’s first straight to Flight Ready “Concept Sale”, this utilitarian dropship from Anvil came as a surprise at CitizenCon and gained popularity very quickly. Having a great amount of weaponary, powerful VTOLs, ability to drop 20 infantry alongside a ground vehicle up to Ursa sized, the Valkyrie is the go-to dropship of many FPS-focused players. Will Prowler change it? That is a question remains to be seen until 3.8 is ready, that is, if everyone and their dog manages to leave their Carracks first.