As of 2019, there are 809 unique Pokemon across 8 generations, each with their own attributes and skillsets.

Of these, many were inspired by our beloved feline friends in real life. If you’re curious about which Pokemon are cats, it’s helpful to first consider what makes an animal a cat.

Traits of cats include:

Keeping these traits in mind, here is the complete list of cat-like Pokemon in the Pokemon World.

We start our list off with the most well-known cat in Pokemon: Meowth (that’s right!). All of us recognize Meowth as part of the trio of Team Rocket alongside Jessie and James. He’s the only one of his kind that can speak English.

Meowth has many of the traits that cats typically have: four whiskers, big eyes and ears, paws, and retractable claws. He can walk upright on two feet or on all four. Like regular cats, he’s playful and smart.

Persian is Meowth’s evolved form and looks even more feline. He has a sleeker, more elegant form and is popular among the rich as a symbol of luxury. Like real life cats, Persian has a fickle personality and is known to scratch and rip things apart for no reason. 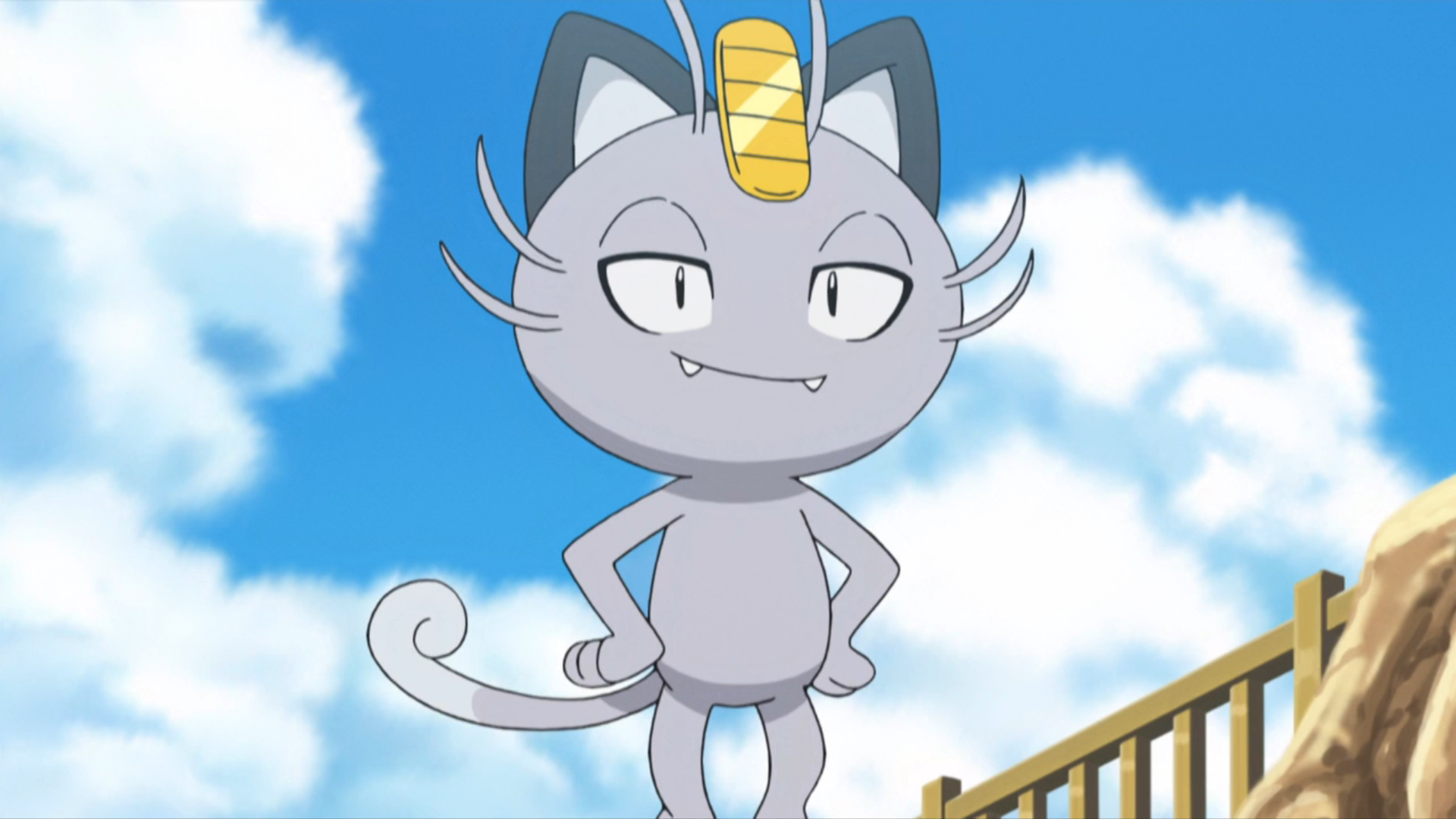 Regional versions of Meowth and Persian can also be found in Alola.

Alolan Meowth were originally rare, selfish and prideful due to having been raised in royal families. After the monarchy fell, they went into the wild and became very common. They have light dark blue/grey fur with half-closed eyes.

Alolan Persian has a similar body type as Persian but with dark blue/grey fur. Its face is rounder and larger with a blue forehead jewel instead of red. It’s just as intelligent as Persian but may think even higher of itself.

Eevee is a mix of a lot of animals: fox, dogs, cats, and rabbits.

Out of all of those evolutions, Espeon most closely resembles a cat. It has large eyes and ears, four legs, small paws, and is covered in lilac fur. Its whiskers protrude out and are sensitive enough to allow it to sense changes in the wind.

Raikou is one of the three Legendary Beasts, alongside Entei and Suicune introduced in Generation II. Of the three, Raikou most resembles a cat and is likely inspired by the saber-toothed cat.

Like the saber tooth, Raikou has two large fans that point out of its jaw. Its face is covered by thick, white fur and a black face guard. His mane looks like purple clouds that are capable of shooting out lightning bolts. He’s also distrustful of humans, a common trait amongst cats.

Skitty is a feline Generation III Pokemon with a unique pink appearance. It has a disproportionately large head compared to the rest of its body. Its legs are also short and stumpy, much like those of munchkin cats. In battle, it generally uses its bulky tail to threaten or swing at foes.

Like many felines, Skitty loves chasing anything that moves, including its own tail. Despite it being distrustful of humans, it’s loved by all due to its cute features and behavior. 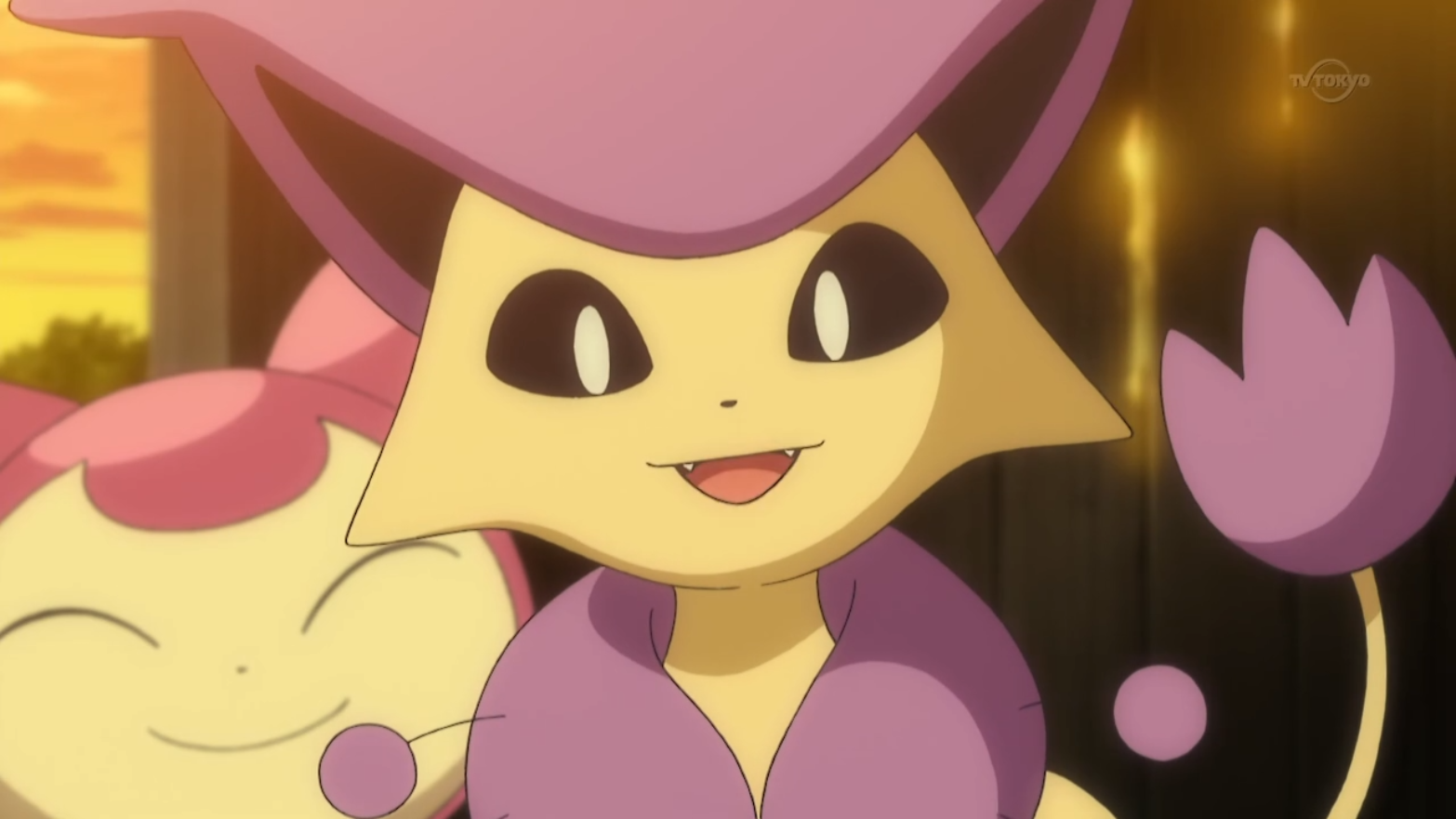 Delcatty is the evolved form of Skitty when it’s shown a Moon Stone. As its name implies, Delcatty is a cat with many markings of a feline. It prefers to enjoy life at its own pace, is nocturnal, and enjoys sleeping in a variety of places. It’s characterized by pointed whiskers and a purple collar, tail, and ears.

Zangoose is another Gen III Pokemon that makes our list. While he isn’t a pure breed cat, he still qualifies as he’s a mix between a mongoose and a cat.

It has white fur marked with what seem to be red scars on its body, has pink eyes, long pointy ears, and a red nose. It has an ongoing feud with Seviper.

Since we included Zangoose, we decided it’d make sense to also include Sneasal in this list. Sneasal is a mix between a cat and a weasel, known for being a vicious predator. It’s been seen stealing Pidgey eggs from their nests when unguarded. 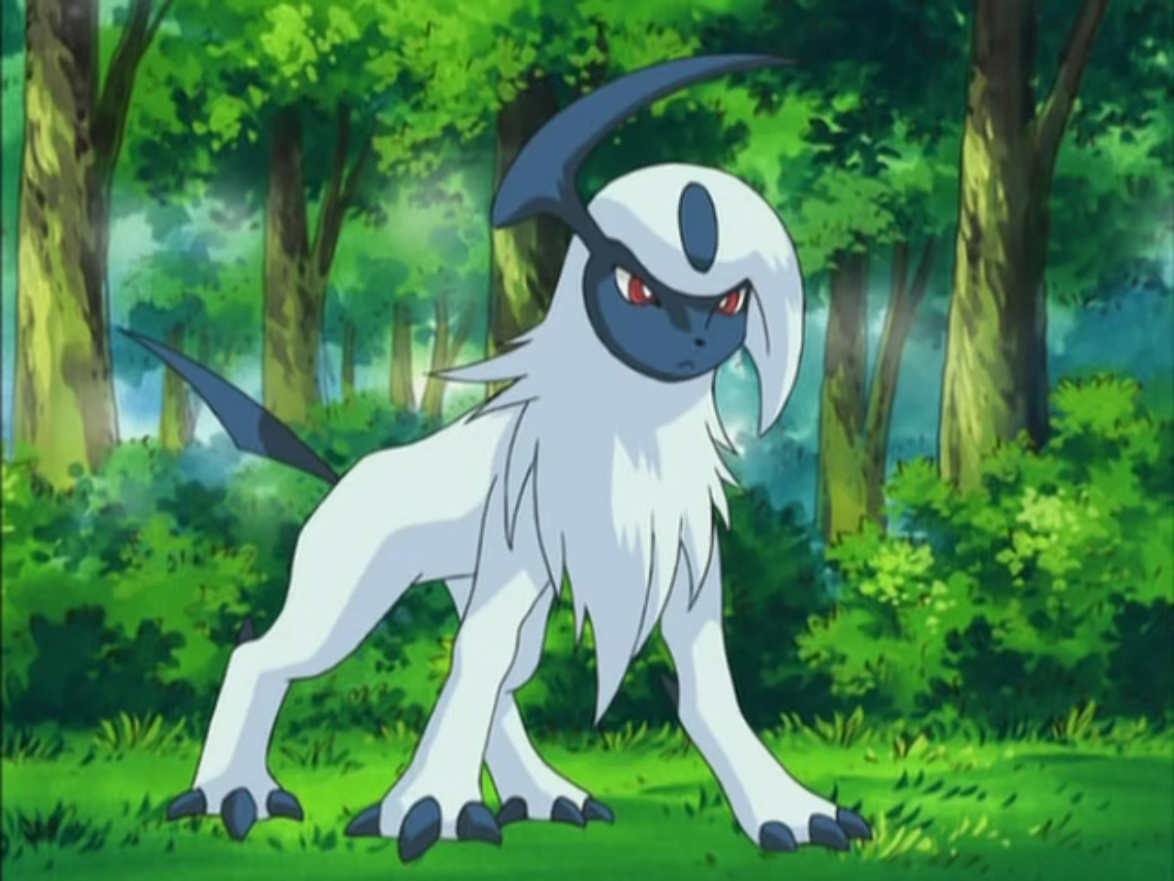 Absol is recognized by its scythe tail and crescent horn. This horn is used to sense impending danger and Absol will go out of its way to warn when disaster is approaching.

It has a feminine shaped feline face with red eyes and adorned by a black-blue oval on its head. Its paws are equipped with three claws while its elbows are lined with sharp horns.

If Absol uses the handheld item Absolite, it evolves into Mega Absol. In this form, it has longer fur that stands on end, almost looking like a wing and giving it the appearance of an angel.

Shinx is a Generation IV Pokemon that looks like a baby lion or lynx. Like Raikou, Shinx and its evolutions are Electric type. Shinx’s fur shines to blind away predators when it senses danger.

Like a cub or kitten, Shinx has a cute appearance and gives off a playful vibe. Its front half of its body is light blue while back part is black. The inside of its ears, eyes, and tail end are yellow while its small nose is red.

At level 15, Shinx evolves into Luxio. While it keeps its blue/black body, it has longer fur, a larger mane, and has a more serious demeanor. Luxio likes to live in small groups where they are able to communicate with each other through electrical pulses.

The final evolution of the family is at level 30, when Luxio evolves into Luxray. If Shinx is a baby lion, then Luxray is the full grown adult form. Most of its body is now covered with black fur and forms a mane on the head. A significant trait Luxray has is its eyesight, which acts like x-ray vision it uses for hunting. 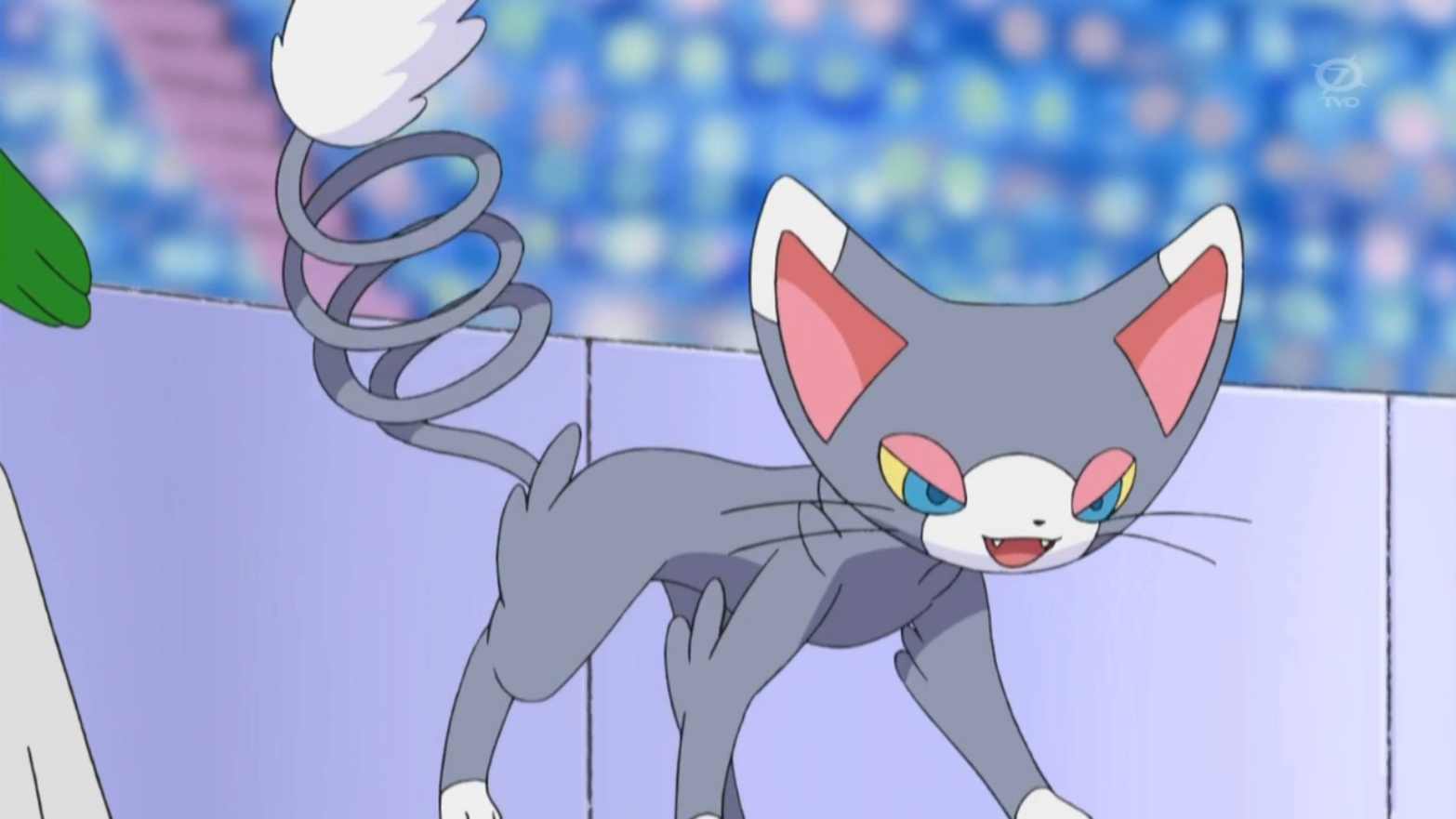 Out of all the cats, Glameow looks most like the modern day domestic house cat. It’s characterized by a gray body, white-tipped ears, four whiskers and a spiraled tail with white fur at the end.

Like many cats, Glameow can be demanding and temperamental. We saw this when it scratched its trainer in the nose when it wasn’t fed.

Glameow evolves into Purugly at level 38 where it takes on a much more round shape. It probably asked for one too many treats! Purugly is quick to anger and isn’t afraid to attack others that annoy it.

Purrloin is a purple felined Generation V Pokemon. Like Meowth, it can also walk on its two hind legs or on all four legs. Its body is covered by purple fur.

Purrloin has a mischievous tendency to steal from humans and will feign innocence when caught. Quite like cats in real life when they stare at you with doe eyes! 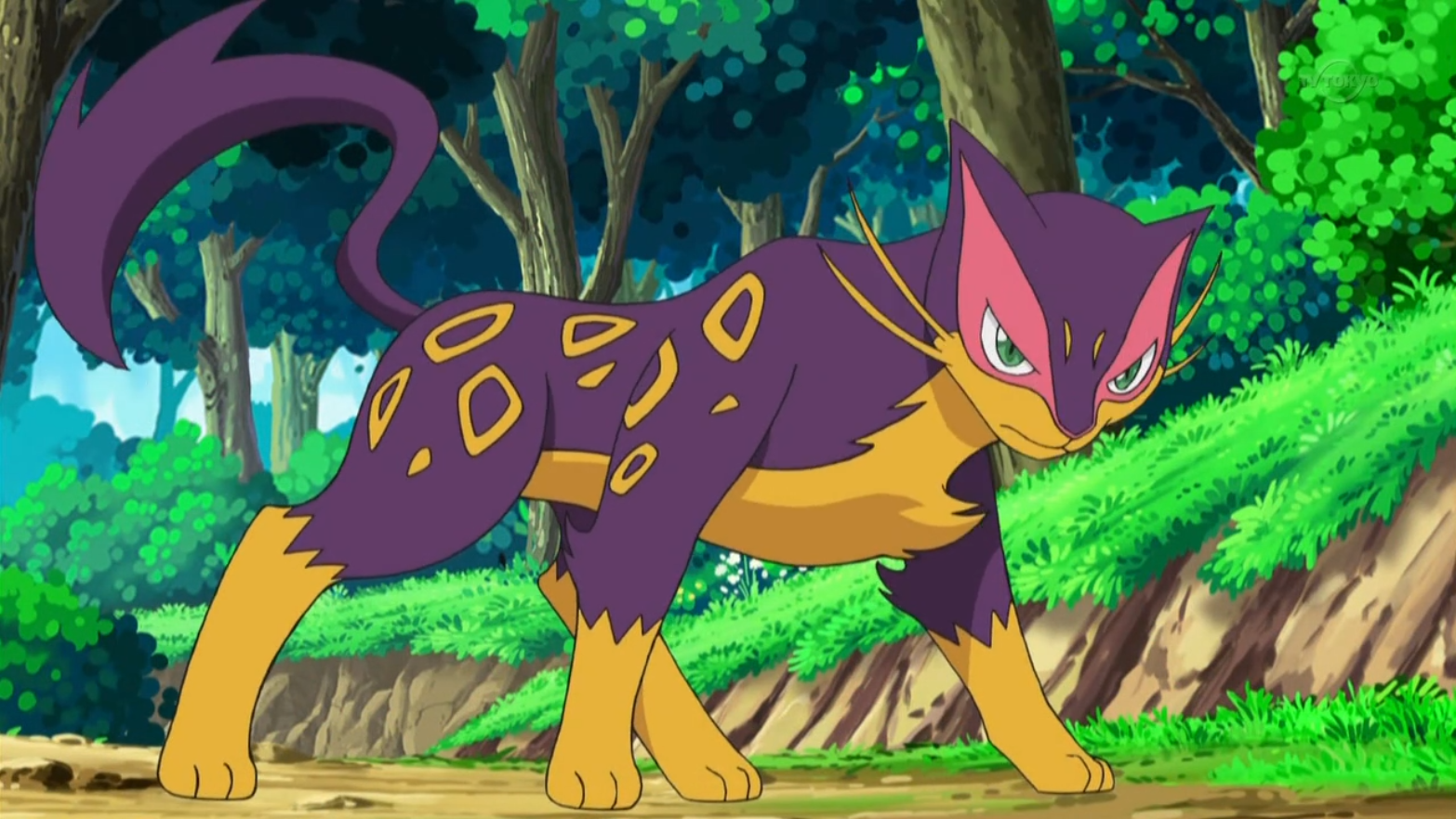 At level 20, Purrlion evolves into Liepard. Liepard loses the mischief, instead replacing it with elegance. It’s comparable to many wild cats like cheetahs and leopards due to its speed and silent nature.

Litleo is another Pokemon that is of the lion family, like Shinx. The major difference is Litleo is a Fire type while Shinx is Electric.

By nature, Litleos are curious and playful, with one of their most enjoyed activities playfighting siblings. It radiates heat from its mane depending on how strong its opponent is. When they’re old enough to fend for their own, Litleos go out and start their own pride.

Pyroar is the evolved form of Litleo at level 35. At this point, it can breathe fire up to 6,000 degrees Celsius in heat. It’s easy to differentiate between males and females by their manes – male manes stick out in all directions and resemble the Japanese symbols for big and fire, while female manes stretch out behind their bodies.

It stands on two legs and is most noticeably recognized by its gray fur, wide purple eyes, and tufts of fur on its head. Its big ears hide two organs that Espurr uses for its psychic powers. This power actually leaks out if its ears don’t cover the organs. 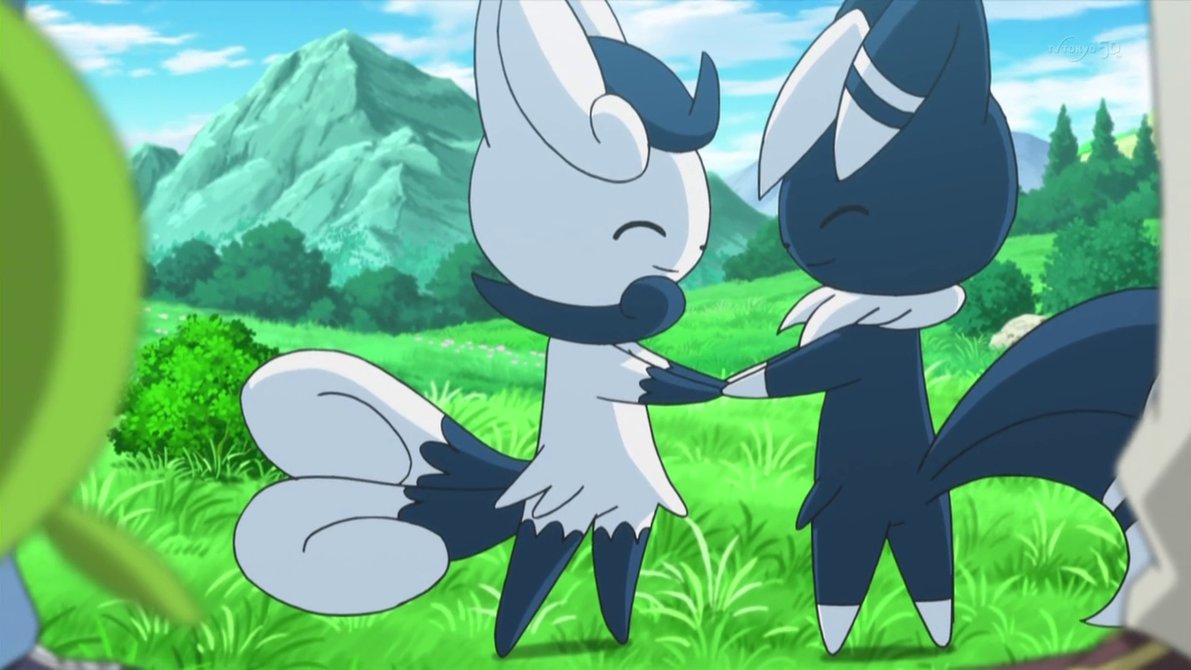 Meowstic is the evolved form of Espurr at level 25. Its appearance differs noticeably depending on if it’s male or female. Males are characterized by navy blue fur, with turquoise-colored eyes. Females are mostly white with yellow-orange eyes. Like Espurr, Meowstic’s ears hide their psychic organs which are capable of obliterating a 10-ton truck.

In Generation VII, we’re introduced to Litten as the Fire type of the three starter Pokemon.

This felined creature is marked by black fur, red stripes on its forehead, and red fur on both cheeks. Litten is generally emotionless and prefers to be left alone in solitude. It has an interesting attack where it stores fur inside its stomach to be later spit out as fireballs. 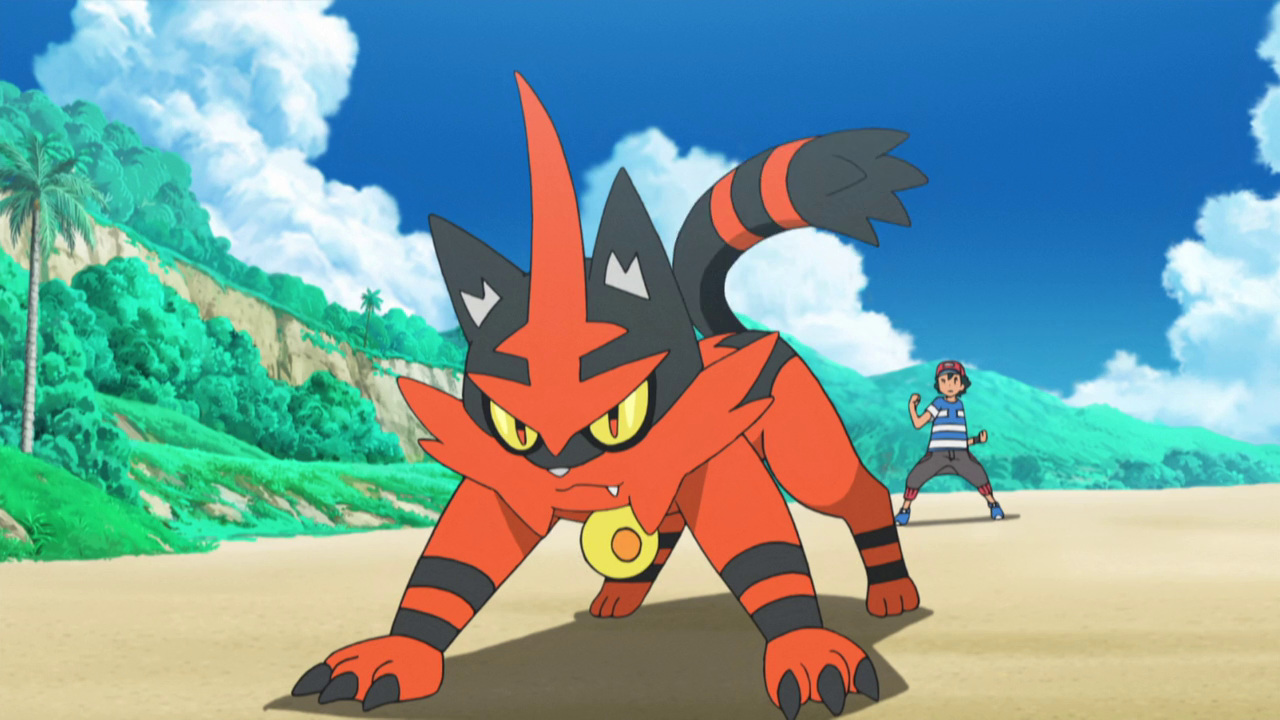 At level 17, Litten evolves into Torracat. He carries around a yellow bell which is a flame sac that is in tune with his emotions. As his emotions rise, so does the bell’s temperature, eventually leading it to spit fire. Torracat generally loves fighting and has a tough battle sense. 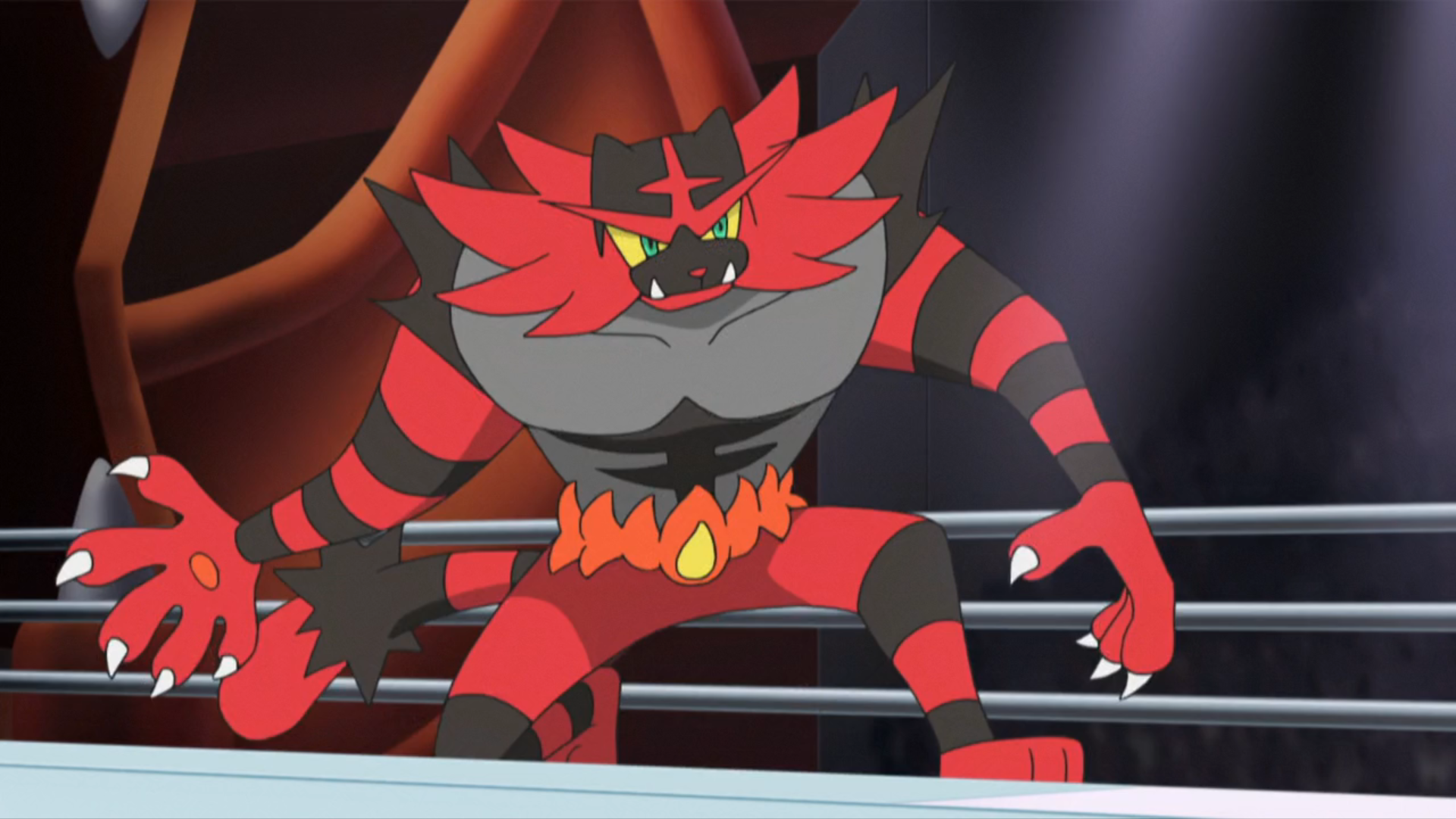 Litten’s final form is Incineroar. In this form, he looks less like a cat and more like a pro wrestler. Incineroar stands on two feet, has a muscular upper body, and dons a belt of flame that looks like a championship wrestling belt (I wasn’t kidding about the pro wrestler status). Unlike many Pokemon, Incineroar is violent in nature and will go out of his way to attack opposing Trainers and ignore his own Trainer’s orders. 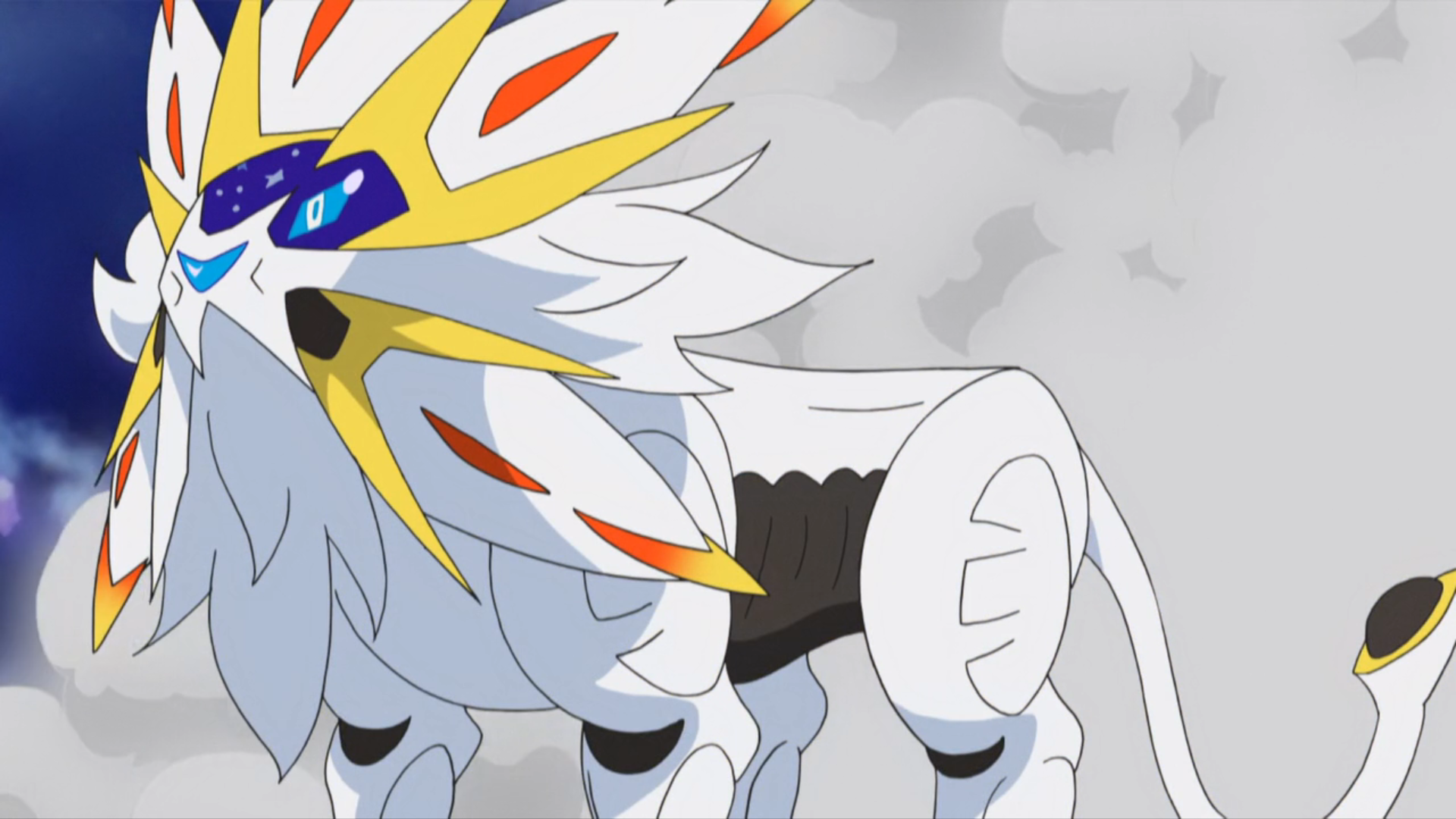 Solgaleo is a Legendary Pokemon of Psychic/Steel type that resembles a lion. Unlike most of the other Pokemon mentioned here, Solgaleo’s prior forms of Cosmoem and Cosmog aren’t cats yet Solgaleo is.

Solgaleo is considered one of the strongest Pokemon, as he has ties to the sun itself. He can create Ultra Wormholes to get to Ultra Space, which is the home of the 11 extradimensional creatures known as Ultra Breasts. 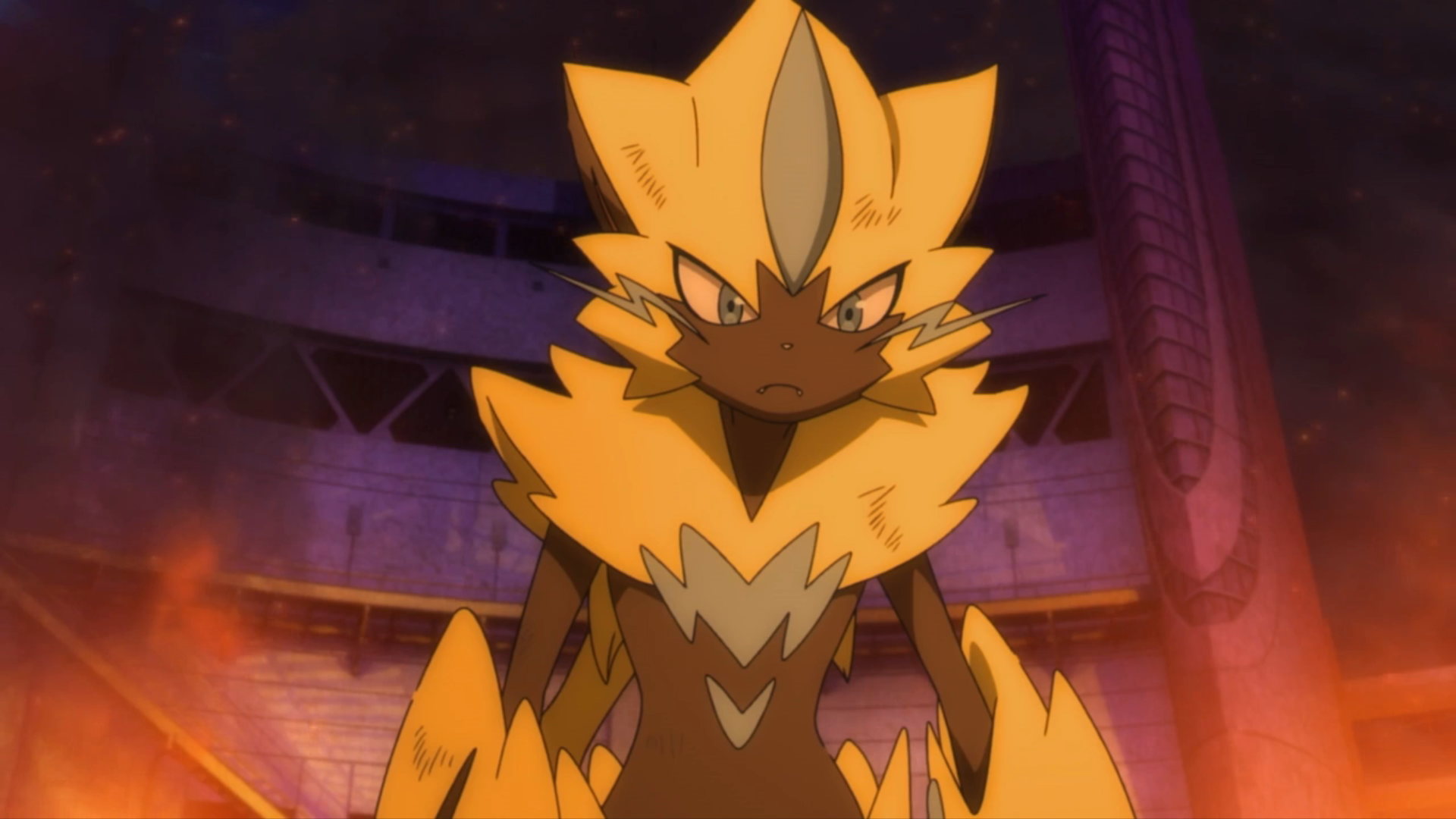 The rare times Zeraora has been seen has shown that it resides in Fula City and has a hatred towards humans for starting a fire in the city long ago. It’s also one of the fastest Pokemon, traveling as fast as lightning.

That concludes the current list of cats in the Pokemon series.

We’ll continue updating this list as new Pokemon are released. We expect there to be some new cats to add once Pokemon Sword and Shield is out in November 2019.

Let us know who your favorite cat Pokemon is in the comments below!

46 thoughts on “The Complete List of Cats in Pokemon”